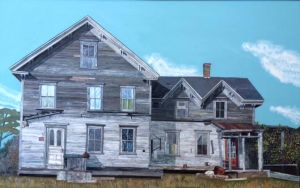 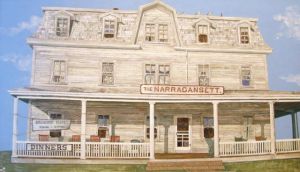 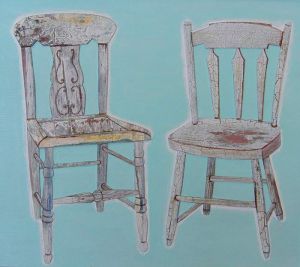 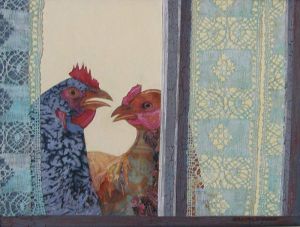 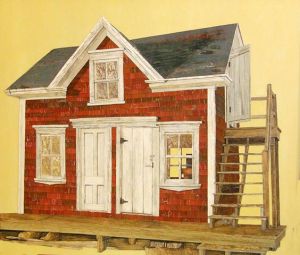 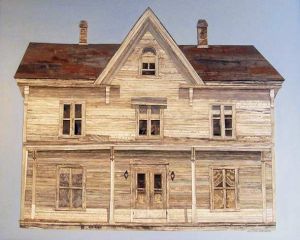 In her intricately layered and textured collages made from disparate elements, both ordinary and exotic, Gillian Stevens evokes a timeless sense of harmony, perspective, and peace. She combines the meticulous, disciplined methods of the draftsman and illustrator with the intuitive sensitivities of the artist to create works redolent of the life and times of the structures she “rebuilds.”

Stevens was born in New York City, NY. in 1948 into a family of professional artists who moved permanently to Block Island in 1963 after years of summering on the island. Her earliest mentors were her parents, Peter and Diana Stevens, both artists.  Peter Stevens, an illustrator for The Saturday Evening Post and well known Portrait Artist, had trained at the Royal Academy of Art in London, where he met fellow art student, Diana.  Another inspiration was Eileen Littlefield Lee, a Block Island native and graduate of the Rhode Island School of Design, with whom Diana opened the Ragged Sailor Gallery. Still another influence was artist Sandra Swan, who introduced Stevens to wood block printing in high school.  After graduating from the Block Island School in 1966, Stevens went on to study at the Rhode Island School of Design, from which she graduated with a BFA/Illustration in 1970.

After a brief stint as an artist/designer for Hallmark Cards, Inc. in Kansas City, MO, and a year living in Columbia, S.A., Stevens returned to Block Island to concentrate on painting and creating collages.  In the 1980’s, she moved with her young son, Rowen, to the mainland and studied metal-smithing and papermaking at the University of Rhode Island.  She has lived in Florida since 1988, presently in St. Petersburg.

Stevens likens her work in collage to the feelings and love that go into making a quilt. It is a process both laborious and inspired. Her collages are mostly done on paper with a variety of media: gesso, acrylics, modeling paste, pencil, pastels, gouache, and paper from many sources, such as wall paper, candy wrappers, gift wrap, fiber, and even popped weather balloons for a crackly, metallic texture.

First in the process is the meticulous texturing of the paper using a palette knife to scrape on modeling paste. Stevens also uses the “resist” method in which water over an oil base is scratched into to achieve a bright lighting effect.  After the paper is prepared comes the cutting gluing of the various papers, a most exacting phase, to achieve the difficult effect of “flow” – the harmonious blending like in a mosaic or quilt of all the elements.  Subtle shading is created by painting over the assembled pieces with acrylic washes and colored pencils.  For soft, smudgy effects, paper is pressed onto wet paint on a wax paper palette and then applied to the surface.  The background is painted last, often in several layers, but without depth in order to heighten the textures of the subject itself.

In addition to her recent work in collage, Stevens has worked in various media creating small wall-pieces in clay, wood, metal, glass and beads, and some larger abstract pieces in mixed media.  Her jewelry has been sold on Block Island, throughout the US, and in the Greek islands.