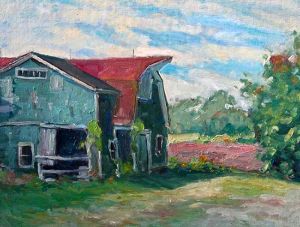 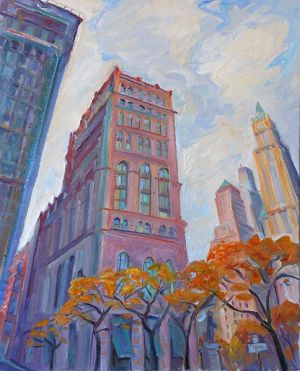 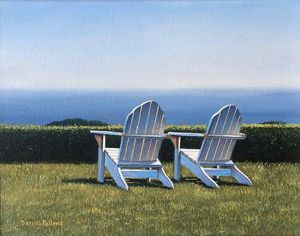 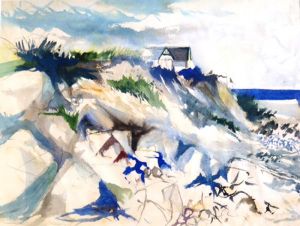 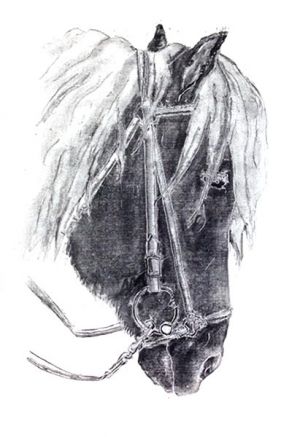 The summer season at the Jessie Edwards Studio may have ended, but the gallery is still full of life with new works by gallery artists now on exhibit.  Among these works are a limited edition of a new woodcut by Sandra Swan, a large watercolor by the late William Skardon, and oils by Daniel Pollera, Gerard Blouin, and Kate Knapp.

After a hiatus of several years, Sandra Swan has returned to her woodcuts with “Hrannar – Icelandic Pony,” an edition of 50 signed and numbered prints. The 16 ½” x 22” print depicts the profile of Hrannar, an Icelandic pony owned by Swan’s cousin, who lived in Warwick, R.I. The rugged beauty of the pony is depicted in vivid detail and texture from the rough, shaggy strands of the mane and forelock to the softness of the muzzle against the bridle. Swan used four blocks to make this print: one for the front mane and inside ear, one for the back mane, one for the head, and one for the reins. The paper for each print is from rare, old paper that Swan saved from earlier prints of larger woodcuts.

“Seascape,” a vibrant watercolor by the late William Skardon, is a large view of the Tuna Club (a favorite subject of Skardon’s and long-gone from the Block Island landscape) on the bluffs along the east beach south of Ballard’s. The foreground is alive with strong, fresh colors and energetic brush strokes – dashes of deep blues, turquoise, green and grey — depicting the boulders, sandy slopes, and prickly brush and beach grass in the foreground. Above is a blue-green sky with a billowing white mass of clouds dominating the upper right. A deep lapis lazuli band of blue sea joins the shoreline and the sky.

Daniel Pollera’s oil-on-canvas, “Block Island Morning,” is a timeless and tranquil view of two white Adirondack chairs on a lawn facing east to the ocean.  Clear morning light spills through the slats of the chairs, upon the low hedge, and across the calm blue water. The blue of the sea lightens to a white horizon, and then returns to the blue sky reflected in the water.

In contrast, Gerard Blouin’s oil-on-linen panel, “Fall Plowing,” is full of autumnal tones, with warm sunlight turning the brown earth of a plowed field a shade of rosy clay.

A deep blue-green barn with a gabled red roof dominates the left center, and the blue sky is streaked with sun-lit clouds. Thick brush strokes create texture on the fields and barn, and short dabs of deep greens, white, and russet form the foliage and trees that frame the scene.

Sun-lit clouds and warm shades of rose, yellow, and amber suffuse a city scene in Kate Knapp’s oil-on-canvas, “Downtown Manhattan Autumn.” Clear early autumn morning light brings out the Beaux Arts architectural details on the façade of the center building, emphasizes the angles of nearby structures, and intensifies the changing leaves on the trees in the park in the foreground.