Marilyn Bogdanffy ~ The Sea Around Us 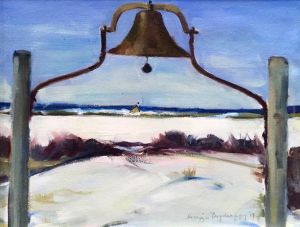 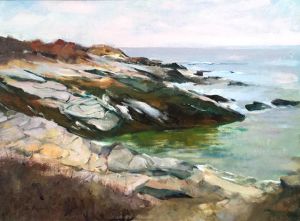 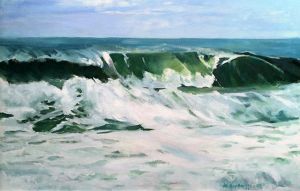 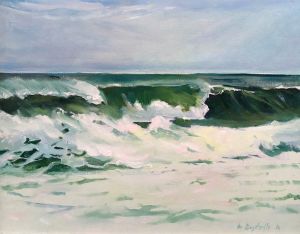 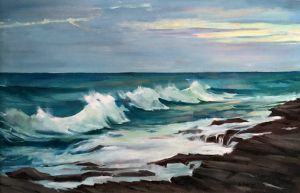 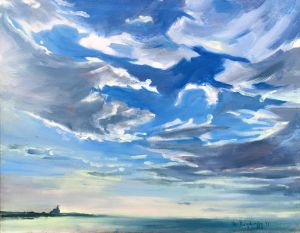 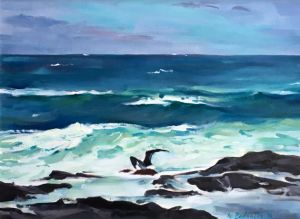 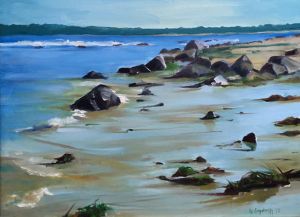 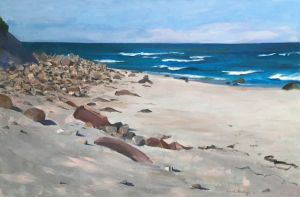 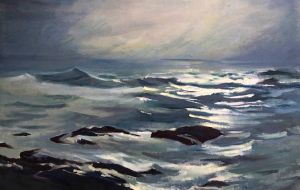 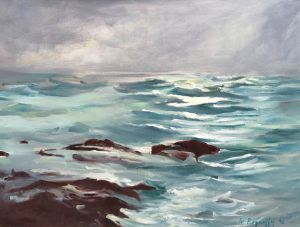 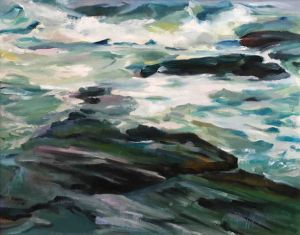 As Bogdanffy’s new oils demonstrate, the sea around us is a dynamic, mutable, infinitely various force. She is excited by the challenge of capturing “the atmosphere” generated by the sea and the quality of light at a particular place and time, whether it is a tranquil scene, a turbulent one, or anything in between.

In  “Barbara’s Bell,” painted this past winter and inspired by a walk along the MacDougal property off Corn Neck Road, we look through weathered posts in the foreground that support an iron frame from which hangs a simple, gracefully curved bell, perhaps used once upon a time to summon cattle from distant fields.  Through this natural frame, we look across a field and Sachem Pond, both covered in snow, to the North Light, with a streak of dark blue water and a clear blue sky in the distance.

The North Light is also a distant silhouette in “Evening— North Light.” Here the interest is all in the sky — its various blues act as a background for swathes of clouds swept together by an almost palpable wind.

The angle and clarity of light are important in defining details.  “Low Tide — Mansion Beach” shows the quiet pull of the receding tide as it deposits clumps of seaweed on glistening wet sand. “Rocks, Stones, and Sand”  emphasizes the texture of the sand and the jagged edges of rocks heaped against the base of bluffs and contrast with the smooth blue and white surf rolling in. The light in “Beavertail”  brings out the nuances of texture and color in the craggy slabs of rock that line the shore of that Jamestown, R.I. beach.

Bogdanffy stirs things up in the aptly named “Turbulence.”  Water foams, surges, and roils over rough boulders in the foreground, suggesting the power of a storm at sea. “Gull” is a scene of similar action with waves breaking against rocks and a gull flying low, its dark wings in relief against the white water. The power of the sea is intensified in “Breakers” and “Boom” (one can almost hear that boom and feel its tremor) with deep greens, blues, and frothy whites depicting the forceful after effects of a storm.

The mood changes once again in “Sundown.” The light of the setting sun is more like moonlight falling across undulating silvery grey-blue waves and dark rocks.

Bogdanffy has included two small studies for “Boom” and “Sundown.”  Each study shows the same scene as the larger work but with subtle differences in atmosphere. The study for “Boom” is lighter in its tones so that while the action of the wave is the same, its force is also lighter.  Similarly, in the study for “Sundown,” the sky is grey but the light falls upon soft turquoise water lapping over the rocks in the foreground.