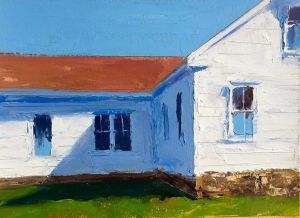 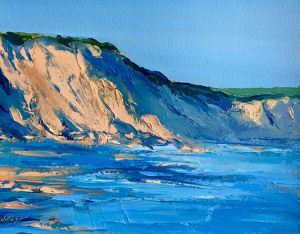 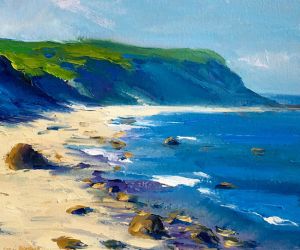 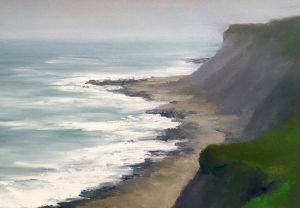 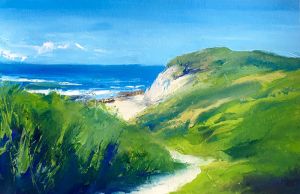 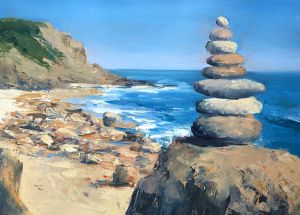 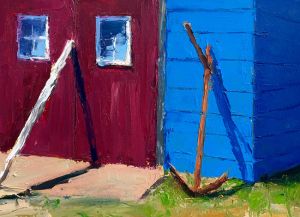 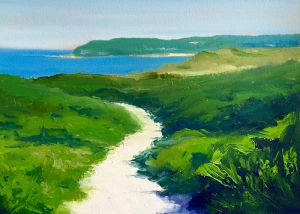 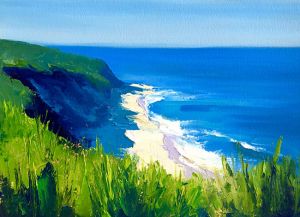 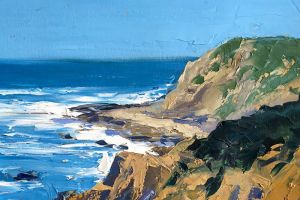 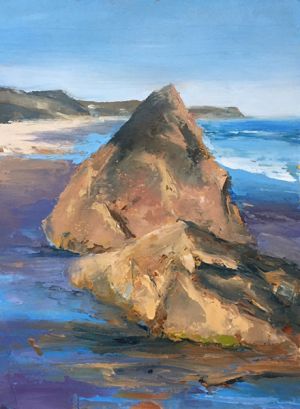 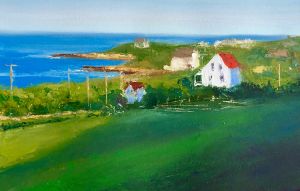 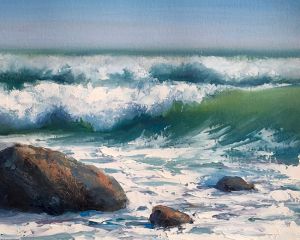 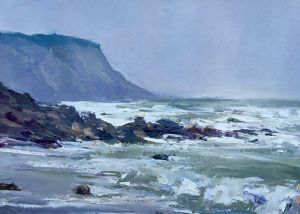 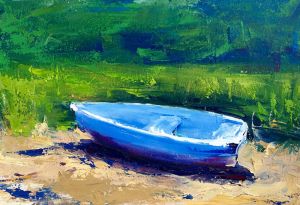 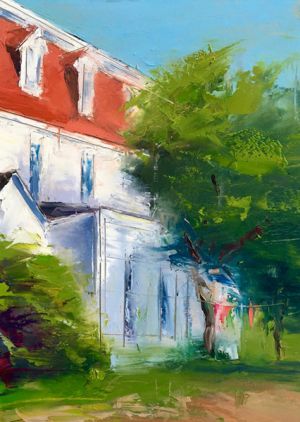 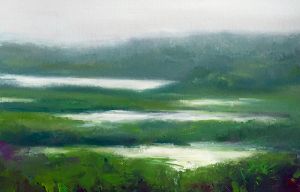 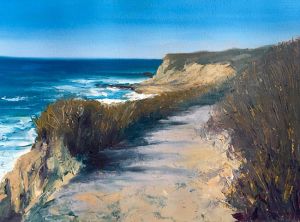 Whitney Knapp Bowditch’s new work in oil on paper and on canvas will be on exhibit from Thursday, July 8 to Wednesday, July 20, at the Jessie Edwards Studio on the second floor of the Post Office building. The artist’s reception will be on Saturday, July 16, from 5-7 pm, a week from the show’s actual opening.

Painted over the winter and early spring, these works show the deepening maturity of Bowditch’s exploration of color relationships, tonal contrasts, and surface texture that have defined her work over the past several years. Bowditch likes the freedom of expression she finds in using a palette knife, but she also likes to combine techniques for heightened contrast in tone and texture. She often uses brush strokes to soften transitions between elements in a piece and areas of distance. “Mohegan Bluffs Cairn” is a perfect example of this blending of brush and palette knife. The column of stones in the foreground is rough and edgy as are the boulders on the beach and the gritty bluffs beyond. Where these elements meet the sea and sky, the texture softens and the lines blur. Enhancing this contrast, the colors in the foreground are warm, earth tones that give way to cooler, deep blues in the background.

Similarly, in the foreground of “Scotch Beach Rocks,” the sharp edges and angles of the rocks blend into pools of deep blue water, while the beach, bluffs, and sky beyond are softer in texture and tone. “Rugged and Unrefined,” a view of the bluffs, is just what the title suggests, and in “Black Rock Reflections,” the deep fissures of the clay cliffs are in relief against the deep blue tones of water and sky. Two studies of the bluffs with tall grass in the foreground are interesting contrasts. In “Quintessential,” in the foreground, a tactile swath of spiky, bright green grass set off by smooth slope of the blue-shadowed bluffs. The textured band of white is the crashing surf below. In “Winter Bluff,” the light is cooler, and the rough path along the bluffs bristles with the brittle brown stalks of grass in the foreground.

Bowditch has long been interested in structures and their edges – the way the elements of a building relate and connect to each other. Several works redefine what “edge” means. For example, in “Block Island Blues,” the blue sky subtly bleeds into the red roof of a Narragansett Inn outbuilding. The white window frames smudge into the textured white clapboard of the siding. Shadows blur the ell of the building. The building’s age and vulnerability are emphasized, but so is its endurance. A similar effect is achieved in “Tranquility” and is taken almost to abstraction in this view of the back of the Historical Society building with its blurred, blank windows, swatches of green foliage, and planes of color.

Nineteen of the works in this show are small, mostly in the 8”x11” range, and are done on heavily textured paper, which Bowditch says is more yielding to her blending of techniques. However, there are two works of the bluffs and Black Rock that are quite large, and are on canvas; which she finds a more challenging surface, yet a satisfying one on which to use her brush and palette knife to dramatic effect.