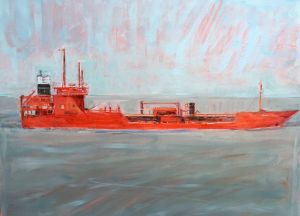 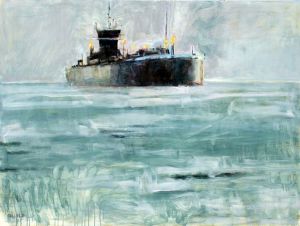 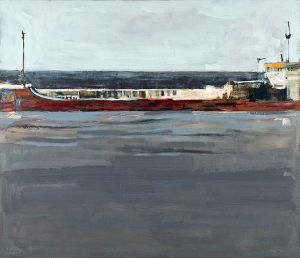 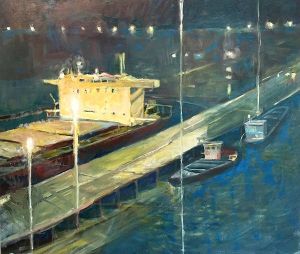 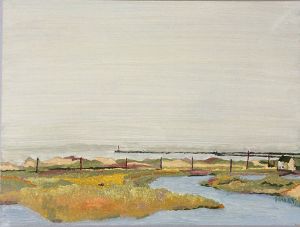 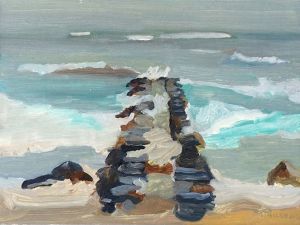 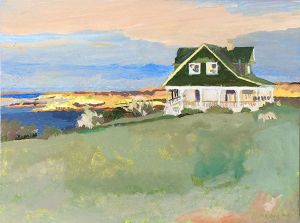 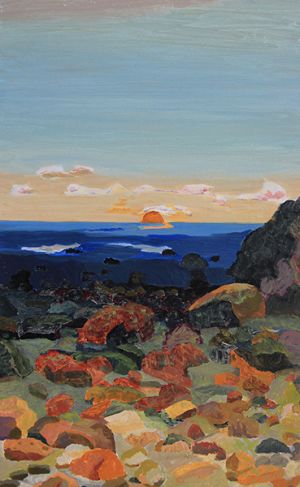 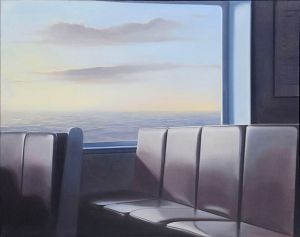 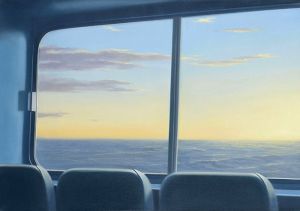 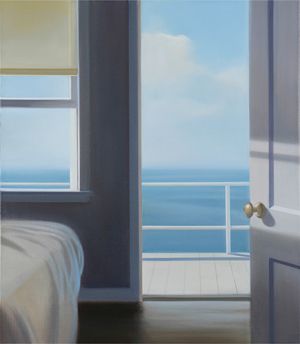 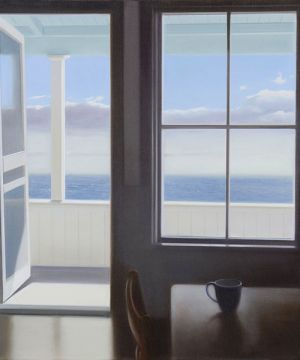 New to the gallery this year, Cynthia Guild’s four large oils-on-panel depict the handsome utilitarian lines and details of a freighter in a variety of abstract contexts. In “Nightfall,” the fading light casts dark shadows across the hull and pilot house of the boat, which rests calmly in grey/green water and the sky. Bright dabs of yellow on posts along the deck flare like torches against the night sky. In “Trapped,” the boat is exactly that: seen in profile across the entire panel, the boat’s red hull, white deck, and a yellow line defining the roof of the cabin are bound by bands of grey-blue water in the foreground and, above, by a darker swath of black water and grey sky. Only a part of the bow and the stern are seen on either side of the panel so that, paradoxically, the impression is of both a static image and one that may be in motion as it passes through the boundaries of the panel.  A blue-grey sea streaked with pinks and a light blue sky filled with red dashes and smears is the setting for “Lady E,” dressed in vibrant lobster red tones as she floats in profile across the panel.  An air of ambiguous expectation is conveyed by “Waiting,” another night scene of near abstraction with a freighter at a dock that forms a long diagonal across the panel. Yellow light spills across the boat’s deck and cabin onto the dock and is reflected in the water. In the distance, a line of yellow smudges and shadowy shapes suggest more boats nearby or perhaps a farther shore.

Stephan Haley’s four pieces, also oils-on-panel, depict quiet, off-season Block Island places in vivid colors and strong strokes. “Jetty” is a view of waves foaming and pooling over the dark blue, black, red, and brown rocks of a jetty in the center foreground while waves roll in the distance.  Similarly, in “Mansion Beach Early Spring,” rocks on the beach in the foreground are warmly colored by a deep orange sun rising over an indigo ocean while breaking waves and low lying clouds are also lit by the early spring sunrise. “Sullivan House” has an early spring freshness to it, also. The deep green gables and roof and bright white porch of the house stand out against the softer green and yellow of the broad field (sans wedding tent). Deep blue water of the Salt Pond to the west and a stretch of sand dunes to the east sit under a band of clouds tinted a soft peach rose by the western sun.  “Fog Lifting” has a softer palette. Fog hangs over the upper two-thirds of the scene with the long dark arm of the Old Harbor breakwater emerging from the mist. In the foreground, the fog has lifted to reveal the soft colors and contours of the marsh grass and meandering pale blue water of the inner ponds and low sand dunes along the beach across the road.

Each of Heidi Palmer’s oils-on-canvas is a serene meditation of the ways in which light informs a particular place and time. If viewed in a particular order, together they also imply a narrative of departure, arrival, and return.  On this journey, “Morning Ferry” links interior and external spaces with a view from inside the ferry’s passenger cabin to the water beyond seen through a large plate glass window. Early morning light falls on a row of empty brown seats. Outside, light falls on the gently undulating waves and low bands of clouds.  “First Day” shows us into a room that is a study in light and shadow and linear forms.  Light shines on the knob of a door opening into the room and also across wrinkles in a white sheet on a bed to the left. In the center directly ahead, pristine white porch floorboards and railing are washed in sunlight,  as is the placid expanse of water and sky beyond the rail. To the left of the doorway, an open window with a half drawn expands this view of the sea and sky.  Similarly, “Porch View” merges interior and exterior worlds in a harmony of lines and angles. Inside, a chair, table, coffee mug, and window are in warm shadows. On the left, a screen door opens onto a white porch with a turquoise inner roof, which in turn frames a view of the sea, clouds, and sky. “Evening Ferry” is a study in blue.  The tops of the empty passenger seats in the foreground are in deep blue/black.  The water, too, seen from the window, is a deep blue except where the pale yellow light on the horizon touches the calm waves and casts shadows on the underside of the low clouds. Journey’s end.