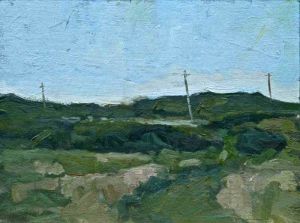 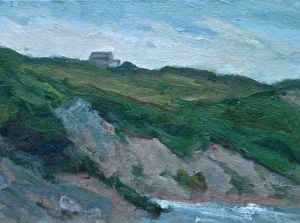 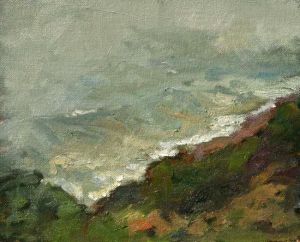 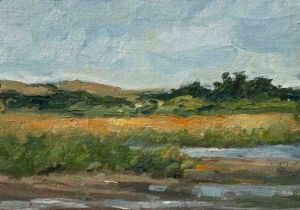 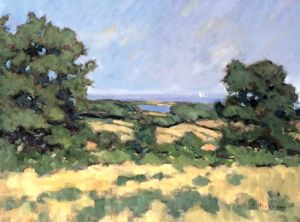 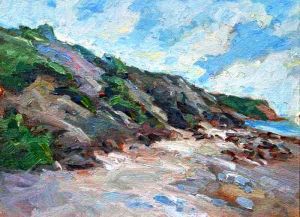 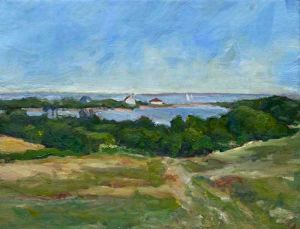 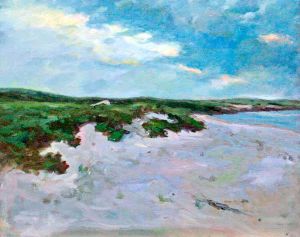 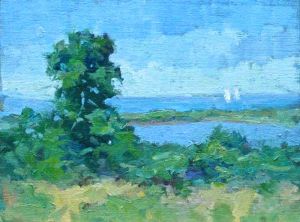 New Oils by Gerard Blouin Link Past and Present

“Prevailing Landscapes – Distant Geology” will be on exhibit from July 24 – August 5 at the Jessie Edwards Studio on the second floor of the Post Office building. The opening reception is on Saturday, July 25, from 5-7 pm.

Gerard Blouin’s new works in oil on linen and panel are expressions of his deep sense of the way in which we can connect the present landscape to the forces of the past that have shaped and are retained in present forms: what prevails.

Recently, Blouin said that when he paints he feels that he is touching layers of time with his brush. “When working outside, I find myself wondering what did this environment look like 100 years ago, or maybe 500 or even 10,000 years ago,” he writes in his blog. In these works, Block Island’s glacial history can be seen vividly. “Mohegan Geology” shows the texture and colors of the mix of sand, rock, gravel, and clay that was deposited by the retreating glacier that formed the bluffs. “BI Geology” is a softer view of the bluffs, its gritty quality overtaken by verdant contours of brush and field and by the human presence of a farmhouse on the horizon.

The rolling topography formed by the uneven melting of the glacial material is evident in several pieces. Both “North” and “North View” depict the undulating fields of Champlin’s Farm in different times: one is in shadowy greens and a lush bank of trees rimming the distant water and clear blue sky; in the other, the fields are rolling tones of warm yellow and soft green with an overcast sky and slate grey water in the distance. “Southwest Lands” emphasizes the deep hollows and slopes created by the moraine that, over time, have been softened with grasses, trees, and foliage. Still present are the rocks of the glacial age, now piled into a low wall that runs diagonally through a field across the foreground.

“Flats,” a view of the grassy, sandy stretches to the north along Andy’s Way, helps us to imagine the sandy plains of thousands of years ago as the island was forming out of the mutable material of the moraine. The timeless inaction of moon and tides can be seen in “Slice of Land,” a view of the Coast Guard beach in the evening when the artist went intending to fish. Hooked by the dramatic scene of the water surging over the sand and foaming across the land – the recurring effect of a full moon at its apogee – he took out his paints instead.

The present and the primordial intersect in several views of dunes seen from Beach Ave. in early morning light. There is no sand in these views of the dunes. Instead, we see green mounds and hummocks, the contours of the dunes covered with foliage. It would be a view from another time but for the phone poles and the curving yellow stripe on the paved road. In “Bluffs in Fog,” the shadows and colors of the bluffs in the foreground meet an edge of white foam that seems to roll out of the mist that shrouds both sea and sky – the bluffs emerging from the mists of time.