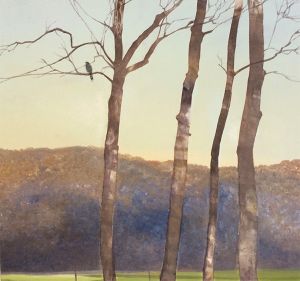 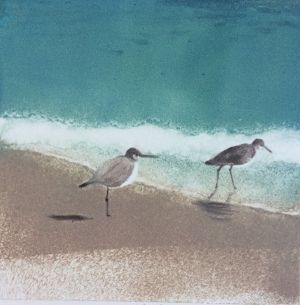 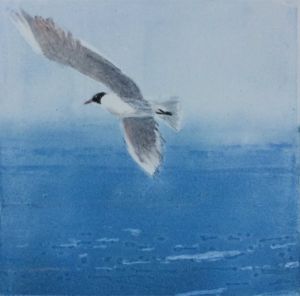 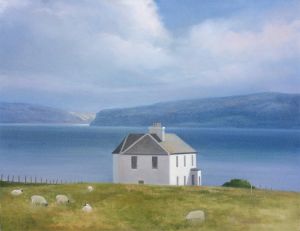 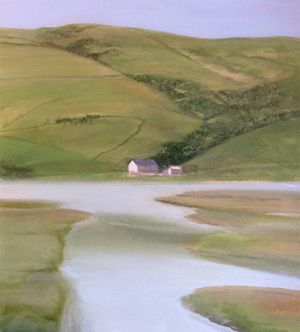 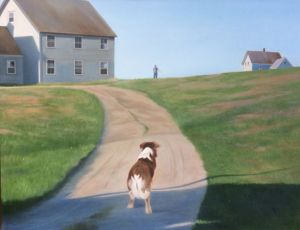 “Light is the motivating factor,” said Heidi Palmer recently, describing her new work in oils and monotypes at the Jessie Edwards Studio. While Palmer has long been known for her luminous oils-on-canvas, she has recently returned to printmaking, in which she majored in college. In these oils and monotypes, the quality of the light defines the form and mood or atmosphere, drawing the viewer into the sense of place and time of each piece.

Monotypes intrigue Palmer because of their element of the unknown. A painting, she explained, allows for more control and can be more easily changed, while a monotype (a single print created in oil or ink on glass or metal) always has an element of surprise. Still, in whatever medium she works, light is essential.

For example, the pale light of the monotype “Cooper’s Hawk” casts grey shadows across a dun-colored hillside and highlights the striped bark of four slender, bare-branched trees in the foreground. Our eye is drawn to a hawk perched on a spindly, gnarled branch of a tree on the left, his back to the viewer. His black head and black and white striped tail feathers stand out against the grey sky. This is a rare moment of stillness for the hawk, most often seen tearing at high speed over woodland and fields in pursuit of prey.

“Shorebirds,” a small monotype, emphasizes the delicacy of two small grey birds tentatively wading on impossibly thin legs along wet sand and into the gentle surf edging the turquoise sea. In contrast, “Gull,” another small monotype, evokes the freedom of flight as the gull coasts on a wind current over clear blue water. The light emphasizes the breadth of its grey wings spread against the sky, the white of its breast turned toward us, and the black of its head and the legs neatly tucked against its tail.

Several works reflect Palmer’s love of stark, wild landscapes and were inspired by a trip to Scotland’s Hebrides and Orkney islands. The muted light in “Island Sheep,” a monotype, brings out the subtle contours of the barren rolling hills dotted with sheep grazing under a lowering sky. A pale sun shines through this grey expanse, a white disc surrounded by a light grey halo. “Isle of Skye” is an oil-on-canvas that is a good example of what Palmer means when she talks of being able to control a painting. She considers this work unfinished at the moment, even though a viewer might not think so. The light is soft and pale as it falls across rolling green fields and hills. A white farmhouse sits in the center of the canvas at the edge of a body of water. The essential form and feel of the piece is there, but Palmer feels it has not been been fully realized. “The painting tells you what it wants, she explained. So, she will return to the “Isle of Skye” at some point to bring it to completion.

“Hesitation,” another oil-on-canvas went through a similar evolution. Palmer’s eye was first caught by the texture of fur on a dog she loves. Not wanting to paint a portrait of the dog, she chose a back view that emphasized the dog’s silky coat and luxurious plume of a tail. But a context was needed so Palmer added the winding dirt road, a house on Lewis Farm on Block Island, a field, another building, and finally a figure in the distance who appears to be waving to the dog. A story is being told as the light on the dog in the foreground keeps him at the center of attention. We are engaged, brought into the experience of that moment.