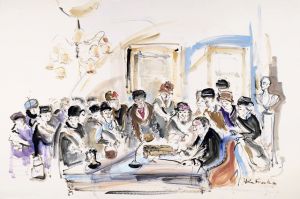 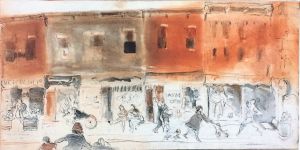 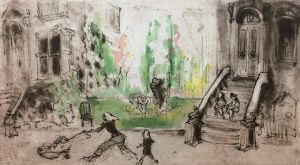 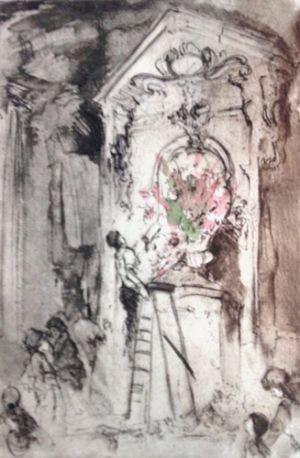 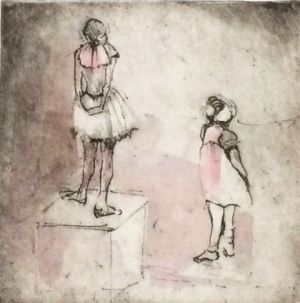 “The 19th Amendment,” Helen Frank’s first signed archival reproduction of her original oil-on-paper, is being offered in time to commemorate the Women’s March, January 21, 2017.

Printed on fine paper, the 20” x 30” giclee reproduction is on exhibit at the Jessie Edwards Studio on the second floor of the Post Office building and is available unframed for $275.00.

The print depicts Kentucky Governor Edwin P. Morrow signing the ratification of the 19th Amendment, which gave women the right to vote, on January 6, 1920, as members of the Kentucky Equal Rights Association look on. (Kentucky was the 24th state out of 36 states needed for the amendment to be passed. Tennessee was the 36th to do so on August 18, 1920.)

In this scene, the women of the ERA stand three-deep surrounding the governor’s desk as he signs the document. They are women of quiet force and purpose as they lean in to witness the historic moment. A marble bust of a by-gone legislator gazes on the scene from a corner pedestal.

Frank’s image is full of rich color and graceful lines and brushstrokes. The women are wrapped in their winter coats, scarves, hats, some adorned with rosettes and bobbing feathers, and they wear sashes that say “Votes for Women” across the front. It is as if they have come in from a celebratory march to the governor’s office for this landmark event.

Frank’s painting brings to life the photo of the event that she saw in the November 13, 2016 edition of the New York Times and which inspired this piece and its reproduction.  It is a “gentle reminder” and a “timeless” comment on the role of women in contemporary society, she said recently.

The gallery has many other works by Frank that show the range of her subjects, her delight in New York City street scenes among them.  The etching “Bleeker Street” deftly captures the pleasant activity of a block in Greenwich Village with its vegetable shop, joggers, baby carriages, cyclists, and walkers in clear light at the street level, with warm tones of red, grey, and yellow falling across the upper stories of the buildings. “City Garden” is a hand-colored etching of a city block, mostly in grey and black, brought to life by the greens, pinks, and yellows that define a garden growing between two grey townhouses.

The Metropolitan Museum of Art and Central Park are favorite places. In “Central Park and 5th Avenue,” Frank again delights in the quotidian aspects of the park’s life: taxis and buses move along 5th avenue in the foreground; dog walkers, joggers, and booths line the sidewalk; in the park beyond, there are walkers, a few cars, and the carriage horses.

Inside the Met, “Regarding Degas,” is a study of both Degas’ sculpture “Little 14-Year-Old-Dancer” and of a young girl pensively gazing at the statue while unconsciously emulating the ballerina’s pose. “Flowers at the Met” again shows Frank’s attention to the daily, often overlooked aspects of life that are moments of grace and unconscious art. In this scene, light falls on one of the limestone niches in the arches of the Great Hall, designed by Richard Morris Hunt, emphasizing the sculptural details of the niche. A museum employee is on a ladder attending to the splashes of green and pink in the very center of the niche, which  are the vibrant starburst arrangements of fresh flowers that are changed every week. The Met’s dynamic life is reflected in this one small aspect of the museum.