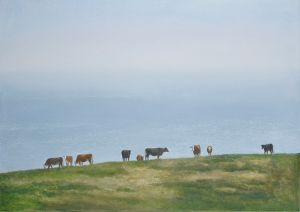 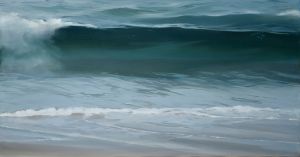 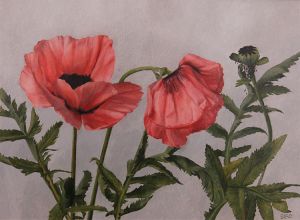 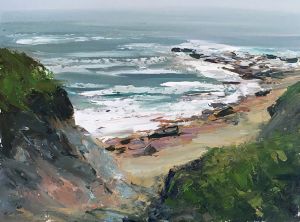 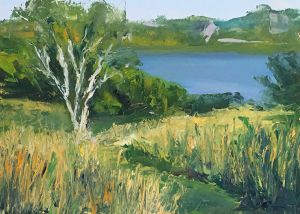 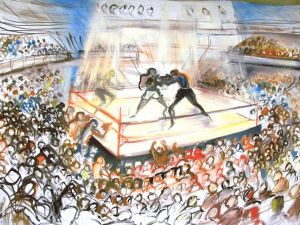 New works in oil by Sarah Bird, Whitney Knapp Bowditch, and Heidi Palmer will be featured at the Jessie Edwards Studio on the 2nd floor of the Post Office Building during the 2017 Holiday Shopping Stroll from Friday, November 24 through Sunday, November 26. In addition, a rare woodcut by Sandra Swan and an early work by the late William Skardon will be on exhibit and offered for sale.

Two still-lifes by Sarah Bird in oil-on-panel are exquisitely detailed studies of flowers. In luminous colors, “Summer Arrangement” gathers together the ruffled petals of pink peonies, slender daisies, and other field flowers with their distinctive stems and leaves seen in delicate detail. Similarly, in ”Poppies,” the vivid flower petals are like folds of coral tissue against the spikey dark green leaves.

“Fresh Pond,” Whitney Knapp Bowditch’s oil-on-paper, is a view of the pond from a little-known path along its western shore. Painted plein air, she uses contrasting techniques. The tall grasses and tree along the path are full of texture with swift, vertical strokes while the blue pond merges with the opposite shore in smooth broad strokes blending the shoreline with houses, fields, and the sky. Again, in “Black Rock Bluffs,” the gritty and grassy texture of the bluffs frames a view of the sea as waves roll in foaming around the dark rocks. The textured quality of the sand and rocks gives way to a smooth grey-blue sea merging with a lighter grey sky along the horizon.

Heidi Palmer’s oil-on-canvas, “Wave,” envelopes us in the undulating nuances of shadow and light created by a large wave as it rolls ashore. In contrast, “Island Cattle” is a view of a herd of cows grazing in a field. Their contours are set off against a pale blue sea that melds almost imperceptibly into a hazy sky.

Sandra Swan’s rare woodcut “Ocean View Laundry Building” was printed in 1968, two years after the Ocean View Hotel and outbuildings were destroyed by fire. It is #21 of an edition of 50 printed on Tableau and Okra machine-made paper. The building housed the help for the hotel as well as the laundry. Before the fire, the hotel had been abandoned and left to deteriorate. Swan carved the woodcut on a single wide board that she found while rummaging through the vacant building in the early 60’s. Its rough texture and weathered tones evoke the neglect and sense of abandonment of the place from which the board came.

“The Boxers,” painted in casein-on-canvas (a milk-based pigment) by the late William Skardon, depicts the legendary and fatal bout between boxing rivals Emile Griffith and Benny “the Kid” Paret on March 24, 1962, which Skardon attended. It is dated March 25, 1962, a day after the match in which Paret was knocked unconscious, fell into a coma, and died 10 days later. In swift strokes, Skardon has captured the tense energy of the fighters and the frenzy of the crowd in Madison Square Garden.

In addition to the works in this exhibit, there are many paintings, prints, drawings, and pottery at all price levels. Starting this weekend, in-stock reproductions by Jessie Edwards and Fred Poisson are 15% off through the holiday season.