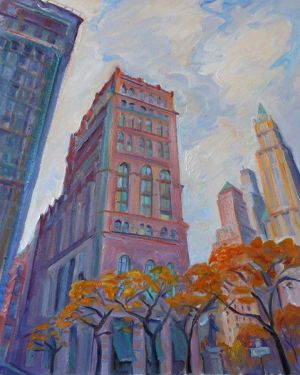 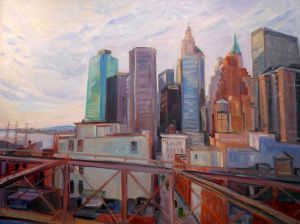 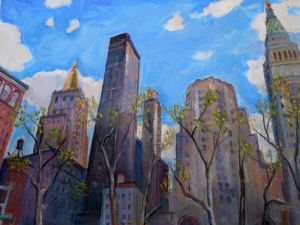 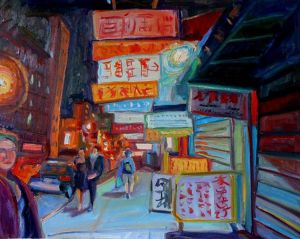 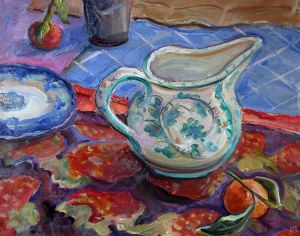 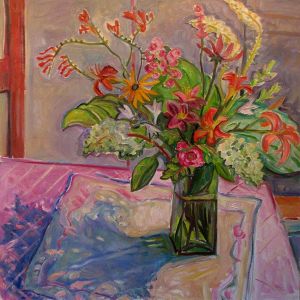 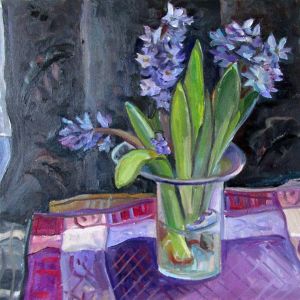 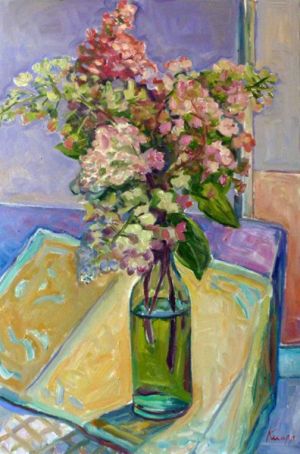 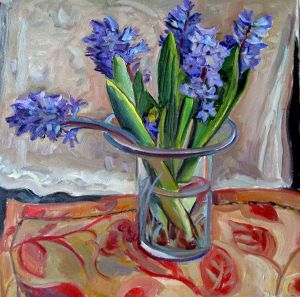 “I adore patterns,” said Kate Knapp recently, commenting on one of the many aspects of her latest works in oil-on-canvas. The patterns may exist in colorful cloths in her still-lifes, or they may be patterns she discovers in nature, or on a structure, a roofline, or even in a grid on a crosswalk on a city street (see “57th Street Looking West”). To Knapp, the grid is “like a cloth tossed across a table.”

For Knapp, a native New Yorker, the city is an endless source of inspiration. On walks around the city’s neighborhoods, she sees paintings everywhere. “I can’t paint all the paintings I see,” she said. Nevertheless, in these works, she captures the tension between the intense dynamism of the city and the fragile elements of light and nature. “View from the Brooklyn Bridge” is a good example of this balance and perspective. From the intricate pattern of the steel framework of the bridge in the foregorund, we look across low buildings to the towers and spires of the Financial District rising into a sky suffused with warm morning light. In the center left, like a ghost ship from another time, a three-masted schooner is anchored at the South Street Seaport.

“Madison Square Park, Springtime” is a near-vertiginous view of tall buildings, with their various rooflines — flat, peaked, arched — defined against a clear blue sky filled with puffy white clouds. Off to the center left, a small wooden water tower sits on a low rooftop, while in the foreground, a row of trees with their delicate limbs full of young yellow-green leaves coming into bloom is set off against the mass of buildings behind them.

In “Downtown Buildings,” the angularity of the tall structures is tempered by the coolness of the pale clouds overhead, setting off the purple, red, pink, and yellow facades. Again, in the foreground, slender trees with fiery orange leaves add to the intensity of the scene.

Where does a pleine air artist find inspiration in winter? For Knapp, inspiration is in the local markets and greenhouses in the Berkshires, where she lives. From them, she gathers fruits, vegetables, and flowers to arrange with colorful crockery on her many swags of patterned cloth. With her love of patterns and vibrant color, Knapp has taken the “still” out of still life. The works are full of vitality and reflect Knapp’s technique of combining contrasting elements, like placing warm tones against cool ones, to heighten the effect of her work. In “Italian Pitcher,” orange tangerines roll around on a purple cloth patterned with deep red flowers. In the center sits an Orvieto pitcher in a cool white and turquoise patter, while to the left is a white plate with a “flow” blue glaze. Another cloth in a blue window pane pattern complements the other cloth and cools off its intense reds and oranges.

Several floral still-lives show Knapp’s interest in using the same objects in a different way. In “Hyacinth, Black Background,” Knapp wanted to use a dark background, “like the old Dutch still-lives,”she said. Thus, the black, textured cloth draped behind the vase of flowers works with the red, white, and purple cloth to deepen the blues and violets of the hyacinths. Cut loos from the bulbs and placed in water, the flowers are freed from their usual stiffness and come to life. “Hyacinth, Cloth with Orange Leaves,” shows us a different way to see the vase of hyacinths. The scene is lighter, and the flowers have a bit less intensity of color but more clarity in the individual petals.

“Bouquet and Shadow “ and “Hydrangeas in Green Glass Bottle” are simple arrangements of flowers on a table covered with a patterned cloth. The position of the vase in “Bouquet” makes room for a full and detailed shadow of the bouquet — a colorful array of different blossoms — to fall across the sun-lit table. In “Hydrangeas,” the vase, now a bottle, is placed in the sun light precariously close to the tables edge, and the cloth drops over the side. There is only a short shadow of the bottle, so our interest is drawn to the lush colors and textures of the densely arranged flowers.

These are the works of the winter. By summer, Knapp will have a new trove of oils on view at the Jessie Edwards Studio. The opening reception for her show is on Saturday, August 4, 2018.