Kate Knapp ~ Recent Island Paintings • Inside and Out

Inside and Out, Kate Knapp’s show of recent paintings in oil-on-canvas, brings together two of the essential elements that inspire Knapp’s work: the intimacy of interior spaces and the freedom of the outside, natural world. They are on exhibit at the Jessie Edwards Studio on the second floor of the Post Office building from August 5-17, with the opening reception on Saturday, August 6, from 5-7 pm.

In these works, painted in the autumn of 2015 and spring of this year, Knapp uses vivid, intense colors and brushwork to “tell a story of the intricate relationships of elements,” she said recently and quoted Matisse on the role of the artist: “The job of every artist is to create our own language.” As an artist, Knapp’s “vocabulary” is an eloquent one – a richly textured mix of layers of color applied in dabs, swirls, streaks, dashes and curves. “Moving the brush, brings order out of chaos,” she said.

The interior scenes were painted over a spell of rainy days in late spring when Knapp was unable to paint outdoors. Nevertheless, the outside is very much a part of the interior scenes. In “At Claudia’s with Ferry Leaving,” a comfortable couch and wing chair sit in front of windows that look out to the sea. The “Carol Jean” can be seen heading out along the horizon. The soft greys, greens, and blues of the furnitures’ fabrics are repeated in the tones of the dune grass, pond, bluffs, ocean, and sky outside. On a low table in the foreground, a vase of flowers is a small still life in purples and pinks.

“The Little Bedroom” invites us into a cozy room with twin beds tucked into the eaves under exposed beams and strewn with brightly striped cushions. A colorful floral curtain is parted over a central window, which links outside to inside. Again, the interior colors are repeated in the blue house with green roof and red door, in the tall green grass, the blue water and the grey sky seen through the window.

Porches are a favorite subject of Knapp’s, and they provide the perfect way to be outside and sheltered at the same time. “Roses on the Porch at Sunset” is dominated by a bowl of cherries and a pitcher of opulent roses on a table in the foreground, but the real energy in the scene comes from the blazing orange and yellow sun setting along the blue horizon and casting its warm reflected light across the water and onto the roses and the planks of the table on the porch.

On several walks last fall, Knapp was caught by the afternoon light on old buildings. The warm, clear autumn light in “Narragansett Inn, Late Afternoon” sets off the individual details of the windows of the unadorned structure. Some have shades half drawn, others are open, some reflect the light while others are in shadow. In another autumn scene, “Beach Houses at Sunset,” the low setting sunlight sets of the angles, rooflines, and gables of the two houses in very different ways, and casts deep grey and purple shadows across the sand dunes in the foreground.

In many outdoor scenes, Knapp emphasizes a perspective that gives a feeling of space. “Long View to the Sea” is a sweeping view from a hilltop. Beyond the stone wall in the foreground, we look across the inner ponds to the ocean where the ferry is heading in under a big cloud-filled sky. In the distance, on the left and right sides, two houses frame the scene, the familiar yellow Victorian on the left and the red roof and yellow clapboard of the Hygeia on the right. In “Morning at the Bluffs,” curving horizontal lines convey the steep, craggy contours of the bluffs plunging to the sea with its blue, green, and white waves rolling in to the shore. The steps to the beach, fragile and spine-like, seem to have been absorbed by the brush. 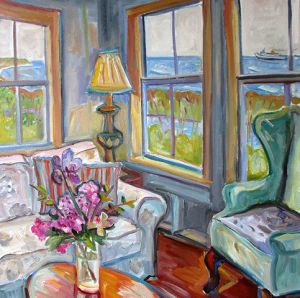 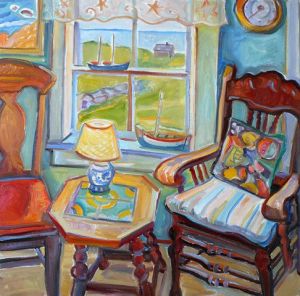 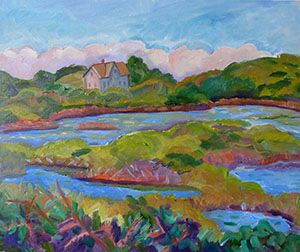 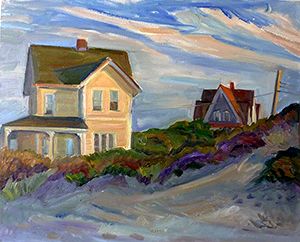 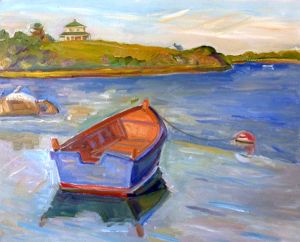 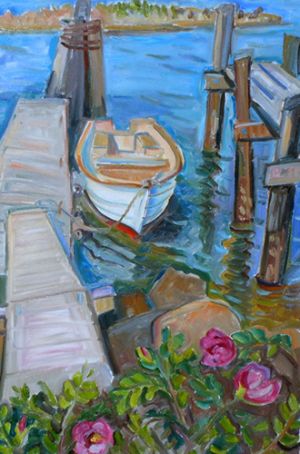 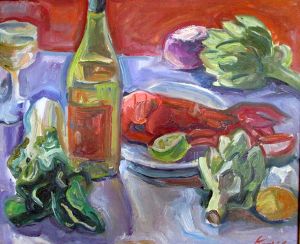 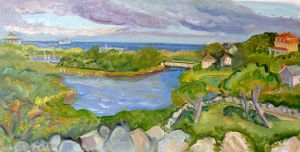 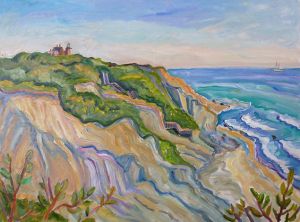 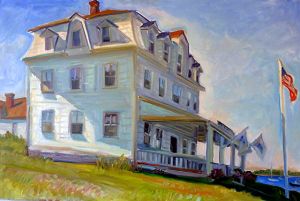 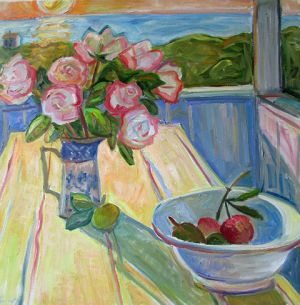 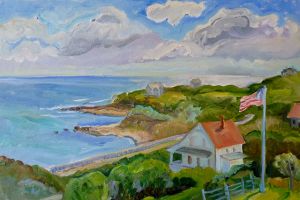 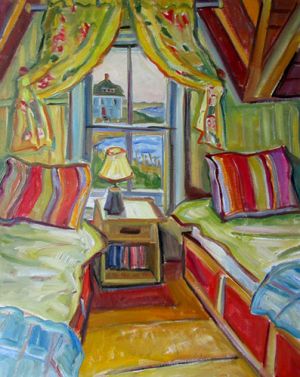