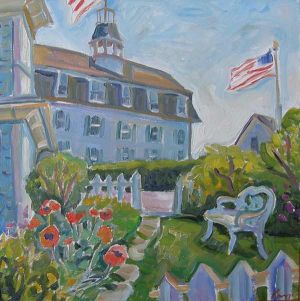 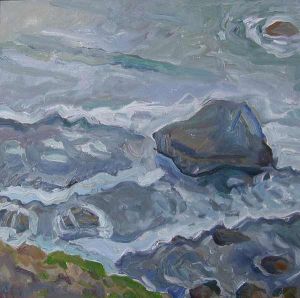 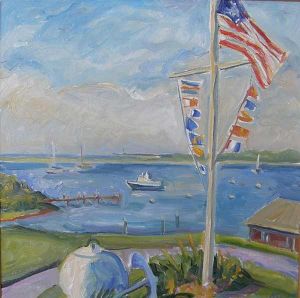 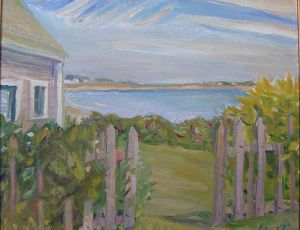 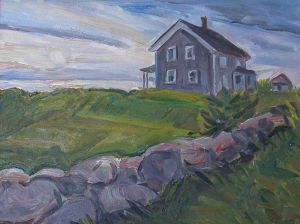 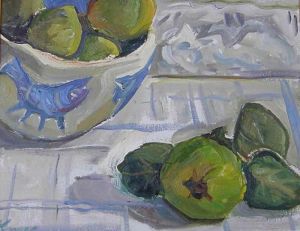 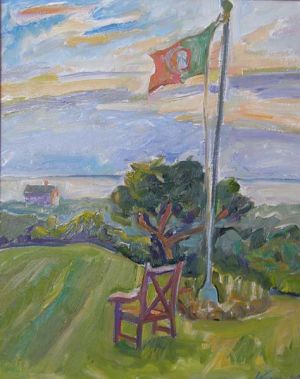 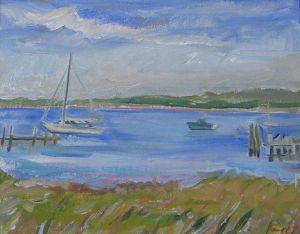 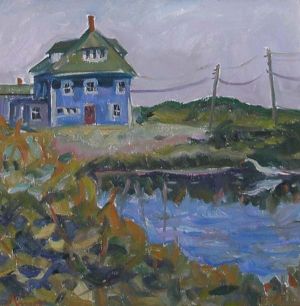 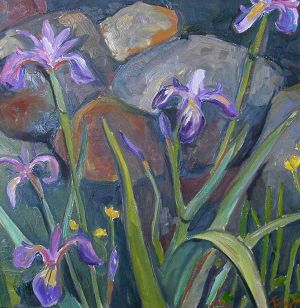 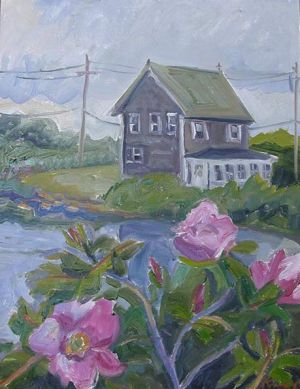 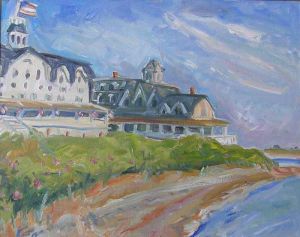 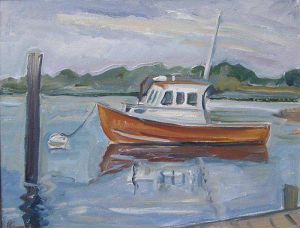 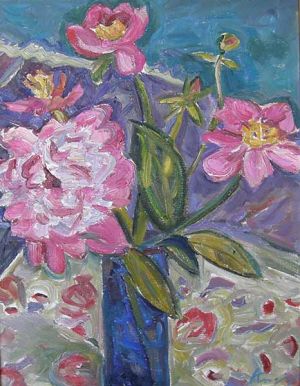 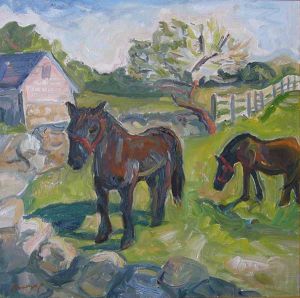 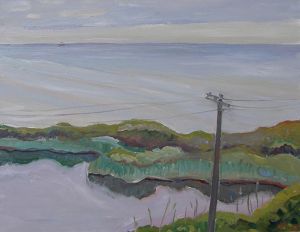 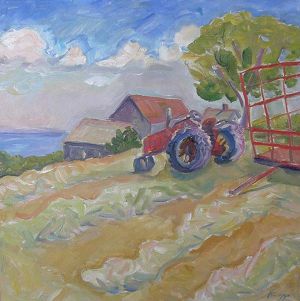 “These are my little epiphanies,” says Kate Knapp about the 20 works in oil on canvas in her new exhibit.

Painted in the spring, these small scenes (11 x14, 12 x 12, 18 x 18, 20x 20, and, the largest, 24 x 24) were done quickly to capture an emotional response to an elusive moment. They are full of the texture and energetic brush strokes, dabs, swirls, and subtle layers of color that define Knapp’s art.

The soft evanescent light of spring mornings is captured in many of these scenes. The light in “Blue Dory Garden and Flag” intensifies the orange and coral tones  of the poppies in the foreground, the white iron bench in the garden, and the stars and stripes of the snappy flags atop the National Hotel and the Island Free Library.  In “National and Surf Harbor View,” the early eastern light warms the sandy shoreline and the soft spring greens and pinks of the beach roses just coming into bloom while also emphasizing the sparkling white facade of the National and the gray gables and red chimneys of the Surf.  The morning sun in “Farmhouse by the Sea” sets off the craggy texture of a stone wall that slants across the canvas, a green sward of grass behind, and a white light washing across the sea and sky and defining the simple lines of a weathered farm house.

Several scenes of horses capture both their muscularity and motion. In one, the contours of two tawny orange horses , their tails swishing, are set against a pond flecked with buoys and a few small boats. “Red Halters and Stonewall” emphasizes the moment when the horses are grazing and looking outward, their dark coats and the greys and browns in contrast to the red of their halters and the blue sky.

Knapp also renders those moments of delight and insight in scenes of flowers and still-lifes. A close up of blue flag iris with its spikey green leaves against the browns, grays, and tans of a stone wall is a signature of spring on Block Island.  The freshness and texture of the pinks and creams petals in the still-life “peonies” is like seeing peonies for the first time. And are those limes piled in a white bowl decorated with blue fish design? Look again and discover that they are the green husks of uncracked walnuts keeping company with the gnarly-textured quince on the white tiled counter.

Some of the most fleeting moments are caught in vignettes of objects reflected in water. In “House and Pond Bird Reflection,” a snowy egret and its reflection flutter almost imperceptibly across a shimmering pond that mirrors the marsh grass – a mass of color in yellows, greens, turquoise, and blue.  In another, an orange lobster boat is at anchor with the orange hull and white cabin of its twin rippling in the water on which it floats. In contrast, “Bluff Rock in Fog” is an intense swirl of dark waves foaming around the hard edges of a boulder and rocky beach. While there is no reflection without the sunlight, there is power and energy in this moment.