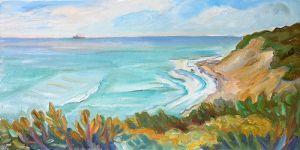 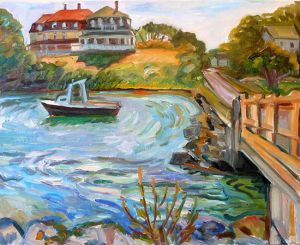 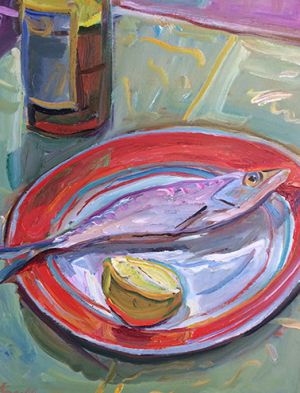 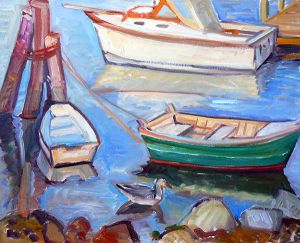 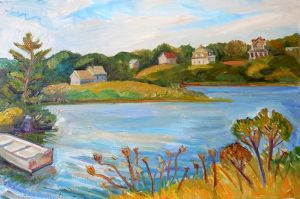 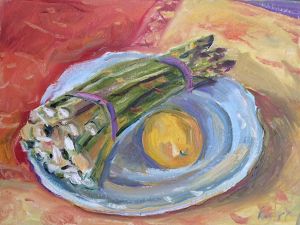 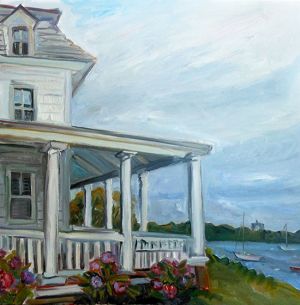 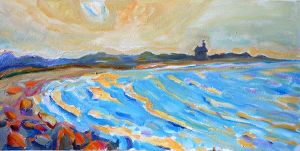 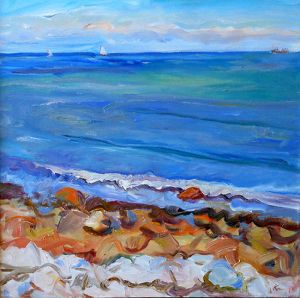 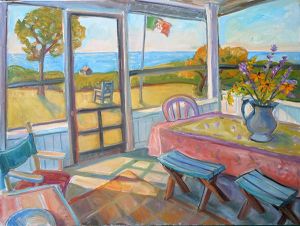 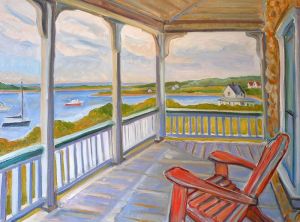 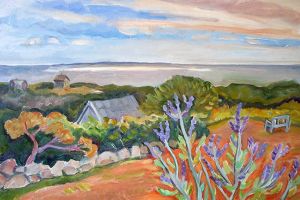 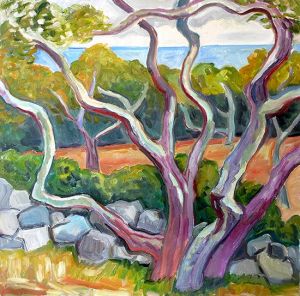 Kate Knapp’s new landscapes, seascapes, and still lifes – all oils – will be on exhibit from August 7 to August 19, 2015, at the Jessie Edwards Studio on the second floor of the Post Office building. The opening reception is on Saturday, August 8, from 5-7 pm.

“Joyful,” is the way one gallery patron described Knapp’s work when it arrived at the gallery a few weeks prior to the opening of the exhibit. Knapp’s own comments on her work reflect that observation. “My eye is in love,” she said recently, describing her delight in seeing something new and beautiful everyday in the familiar, quotidian aspects of Block Island.

Bright colors and generous, sweeping brushstrokes convey Knapp’s sense of the moment she is capturing. For example, “Moon Setting, Mansion Beach Morning” was painted at daybreak in the fall of 2014. Cool, pale light falls across the sand, water, and clouds. Just barely seen in the upper right corner, a full moon is setting in the southwest as the unseen sun is rising. “Sunny Morning and Sea” is a companion piece painted the same morning. Knapp has turned to the northeast to capture the warmer light on the beach and water, with the risen sun hovering just over the early boat heading for Point Judith.

In vivid contrast, “North Light Sunset,” painted in the spring of 2015, is full of dramatic color. The North Light is a small, shadowy silhouette in the background   while the blazing light of the sunset turns the rocks on the shore deep red and purple and the foam of the rolling waves a bright orange.

“Russian Sage and Light on Water” depicts that fleeting moment when the light bursts forth as a storm passes. The purple blossoms and the silvery green sprigs of the Russian Sage are vivid in the foreground as the light opens on the distant grey water and across the fields.

Three scenes of porches have a meditative quality. In “Narragansett Porch, Autumn Day,” the white pillars and railings of the porch are set off by the purple hydrangeas and deep blue water of the Salt Pond. The rooflines are grey against a broad sweep of cloud and blue sky. “Sullivan House Porch with Red Chair” has a similar solitary feeling. The lone red Adirondack chair brightens the shadows falling across the porch, facing west across the Salt Pond.    “Our Porch in Afternoon Light” is a warm interior view of a porch with afternoon light casting shadows on the chairs and on a table with a vase of purple and orange flowers. Beyond, the light falls on a single chair on the lawn and the distant blue water and sky.

Other places and objects have caught Knapp’s eye: a lobster boat by the bridge to New Harbor; the gnarled and sinuous limbs of a shad tree; a serene view of a distant ship off Mohegan Bluffs; three small boats and a sea gull bobbing in the calm waters behind the Hog Pen.

When Knapp can’t paint outside, she turns to painting still lifes, which she calls “little landscapes in themselves,” in the sense that in composing the elements of a still-life, she creates her own world. The worlds she has created abound with flowers, fish, and fruit. In “Sunflowers on the Porch,” the large, spikey orange and yellow flowers heads seem to dance in the vase on the table. The title “Radishes in Blue Colander” says it all: crisp, gleaming deep red radishes fill a dark blue colander. Bright yellow lemons bring a certain zest to “Fish with Lemon” and to the subtle greens of the plump