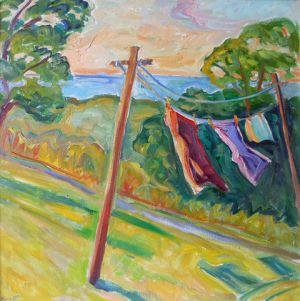 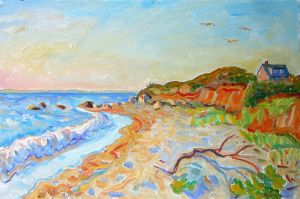 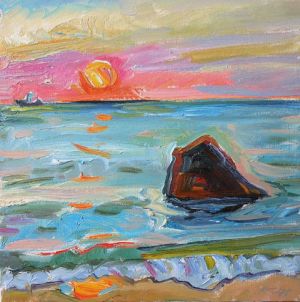 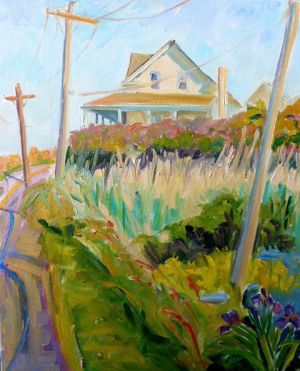 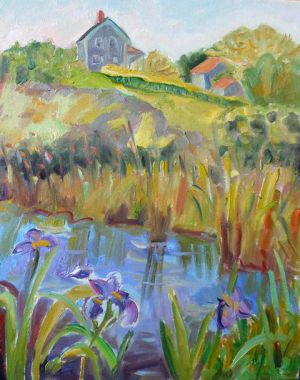 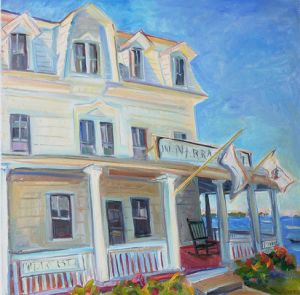 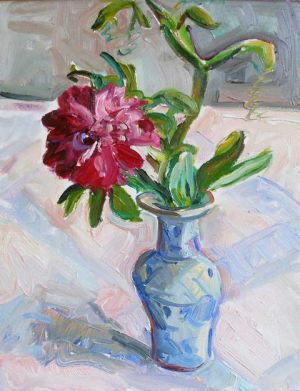 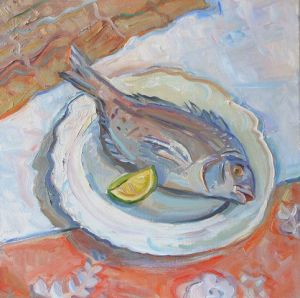 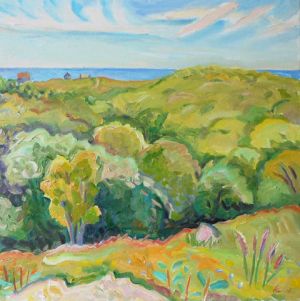 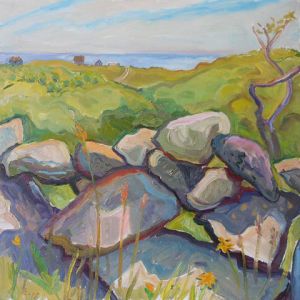 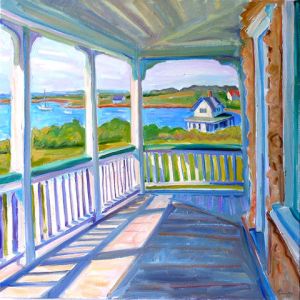 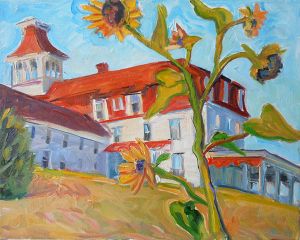 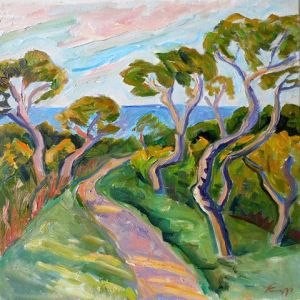 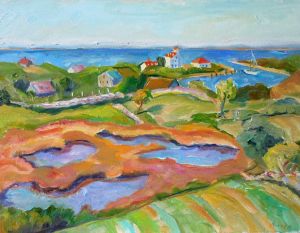 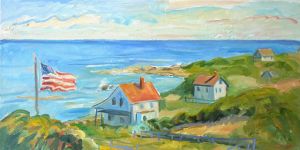 Knapp is fascinated by the mutable qualities of light as it changes through a day and through the seasons. Painted in the fall of 2012 and the spring of 2013, these works catch the fleeting effects of light as it falls on objects and structures, and as it is reflected by water. For example, one late afternoon in the spring along Seal Cove below the Spring House, Knapp’s eye was caught by a clutch of deep blue and purple irises by a shimmering pond and by the western light on the grey shingled house on the hill above the pond.  An hour or two later, turning her gaze from west to south, Knapp noticed the change in light and, in “House in Afternoon Light,” captures that change in light falling across the same pond and marsh grasses, casting pink tones on leaning phone poles, hedge rows, and pavement, and defining the gabled roof of a house against a blue sky. “Sunflower and Spring House” is suffused with the golden light of a late afternoon in autumn.  The light sharpens the angles and deepens the tones of the red roof and the cupola of the Spring House, which is seen from the garden below.  In the foreground, the golden heads of a sunflower rise on a deep green stem, like Jack’s famous beanstalk, into the blue sky to stand next to the off-kilter cupola.

Two other works painted in the same place within hours of each other show dramatic shifts in the effects of changing light.  “Rodman’s Hollow” glows in warm morning light defining green and yellow mounds of foliage and brush that dominate half the canvas. A dirt road in the distance leads to a few houses along a blue band of sea and to a blue sky piled high with clouds.  Painted a few hours later, “ Stone Wall Rodman’s Hollow” has a sharper light that puts the precarious balance of the stones, their rounded and jagged contours, into bold relief.  In the right foreground, the twisted trunk and branches of a bare tree repeat the shapes of the stones.

The effect of light on water can be seen in views of the coves on the east and west sides of the island.  In “Seal Cove, Bluff, and Rocks,” warm early light sweeps across the water in swirls and dabs of blue and white and tints the sand banks with peach and

rose hues. The overcast sky in “Seal Cove” is reflected in the blue-grey water and muted tan sand which sets off the vivid magenta of beach roses in the foreground. “Dorie’s Rock Fishing Boat” is ablaze with a setting sun in vivid orange, yellow, pink, and crimson. Dabs of yellow fleck the swirling green, turquoise, and blue water as it eddies around the dark rock in the foreground, and the dark shape of the fishing boat heads out to sea along the horizon.

“Buildings absorb and reflect light,” Knapp has observed.  This idea is particularly apparent in “Narragansett in Sunlight,” a view of the façade of the hotel in warm morning light that sets off the details of railings, dormers, and roof lines against a cool blue sky.  Mid-day light in “Sullivan Porch” washes across railings, floorboards,  the interior beam of the porch roof, and  against the stone walls of the house. The porch is the cool vantage point that frames the view beyond of houses, boats, and the Salt Pond in brighter light.

Earlier in the day at 10:30 am, Knapp will give a painting demonstration  on the patio outside Island Bound Bookstore. Working in watercolor and gouache, she will show and talk about how a painting begins.