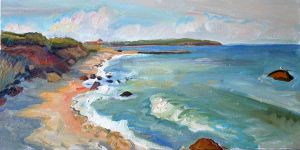 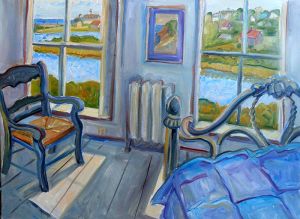 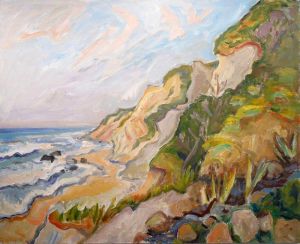 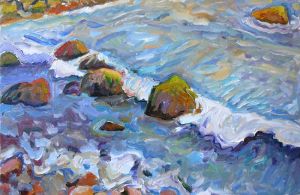 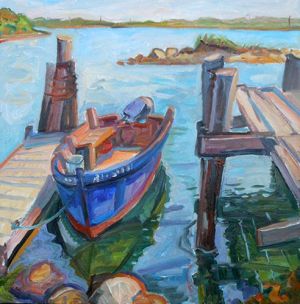 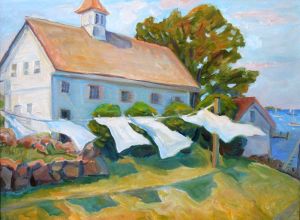 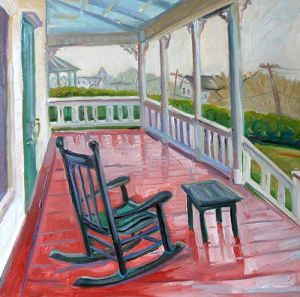 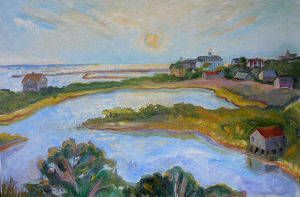 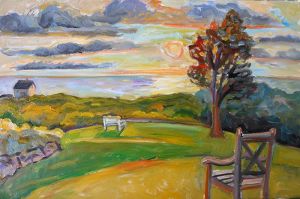 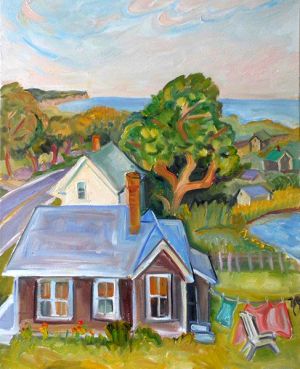 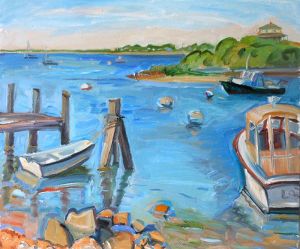 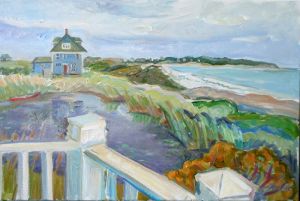 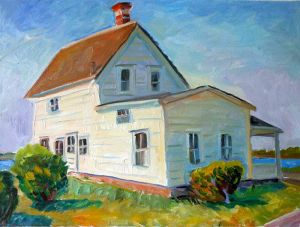 “There is always something I’ve not seen before,” Knapp said recently about the works in this show. No matter how familiar she is with a place, each day brings the promise that she will suddenly see something she has never seen before in quite that way: the angle of light, the arrangement of elements, the point of view – all contribute to how a painting comes into being. It is a quality Knapp calls the “physicality of painting.”

These new works show what she means. For example,  “Bluffs – View from the Stairs,” one of the largest oils (32” x 42”), was painted from a precarious perch at the bottom of the stairs on Mohegan Bluffs early one morning.  It brings us close to the craggy contours of the bluffs lit with warm tones of yellows, greens, tans, and pinks rendered in long, curving strokes that are repeated in the blues and foamy white of the surf rolling onto the sandy trip of beach.  “Bluffs Dark and Light,” painted in the late afternoon in the autumn of 2013, is an interesting contrast with the waning sun casting warm light on one side of the bluffs while the other is in deep blue shadow. A view of the water beyond connects the two outcroppings.

A large (30” x 40”) interior, “Bedroom View from Andrews,” puts us in the serenity of early morning in a room simply furnished with a brass bed and wooden armchair with a rush seat. Two large windows look out east over the inner ponds toward town and the houses on a hillside. A painting of the bluffs hangs on the wall between the windows (perhaps a Knapp?) — a unique joining of inside and outside aspects of the island.  Higher up in the Sperry Andrews house, “A View from Andrews Turret,” takes us above the trees and chimneys of neighboring houses to look northeast to Clay Head and out to sea. At the same time, we have a bird’s eye view of the pond and a clothesline below in the right foreground, with a glimpse of black lingerie on the line just at the edge of the scene.

“Rocking Chair on a Rainy Porch” is a little-seen view of the Springhouse annex porch with a solitary wooden rocking chair and table in the foreground, the wet red floorboards of the Victorian porch glistening against the white clapboard and porch railing. “Narragansett Laundry in Wind, “ (30” x 40”) captures another rarely seen perspective of a clothesline behind the hotel, crisp white laundry snapping in a sharp wind and casting green shadows across the lawn. Knapp’s “physicality” takes on new meaning in this work. The wind was so strong that the canvas was blown off the easel, and Knapp finished the painting with the canvas on the ground.