Kate Knapp in Winter — Inside and Out 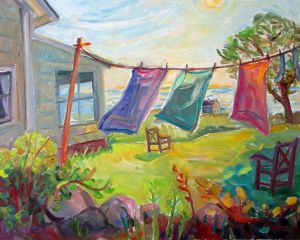 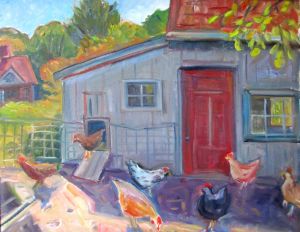 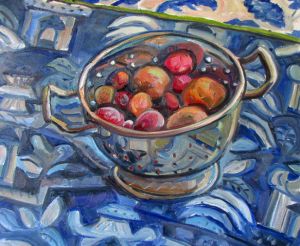 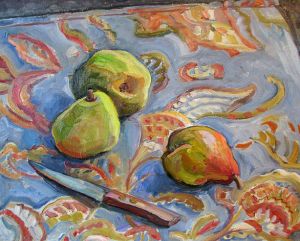 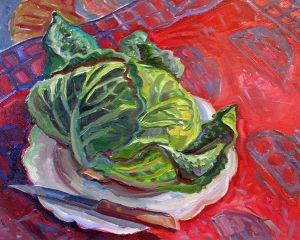 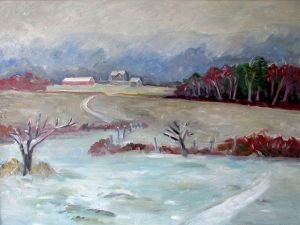 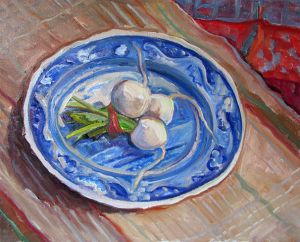 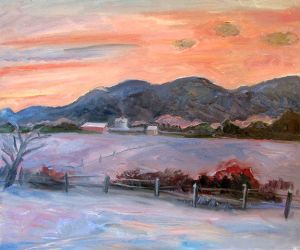 Kate Knapp does not bank her artistic fires through the winter. Her canvasses glow with vibrant color laid on with brushstrokes of such vitality that her engagement with her subject is a palpable sensation emanating from her paintings.  Knapp’s new oils-on-canvas from the late fall to the present are available from the Jessie Edwards Studio on the second floor of the Post Office building.

Knapp’s delight in a “simple plate and food” can be seen in several still-lives. In “Turnips on Blue Willow,” a cluster of three crisp white turnips glows against the deep blue plate. Green stems are held by a deep red band that picks up the colors in the fabric on which the plate cuts. The curling tendrils of the turnips’ roots seem to become part of the plate’s willow pattern. Similarly, “Tangerines on Chinese Plate” shows deep orange-red fruit at their peak succulence on a blue plate set off against a swirl of bright green material.

In “Savoy Cabbage,” the deep green crinkly folds of a head of cabbage are vivid against a simple white plate set on a red and purple cloth. A paring knife in the foreground reflects the shadowed ribs of the cabbage leaves.  That same knife appears in the foreground of “Pears and Knife,” and it helps to define the three pears whose colors and contours almost merge with the intricately patterned cloth on which they sit.  “New Potatoes in a Colander” is another deceptively simple view of a humble subject-  in this case, Knapp’s modest crop grown from a batch of seed potatoes. The deep red-purple potatoes sit in the shiny stainless colander that is slightly off kilter on an patterned blue and white cloth with the pattern reflected in the curves of the colander.

On a misty, snowy day in early January, Kate’s eye was caught by a certain quality of light and color.  “Snowy Day in the Valley” captures that feeling in its muted treatment of lightly snow-covered fields with small, spare trees and fence posts zig zagging through the foreground. A farmhouse and outbuildings are in the distance. Hedgerows and stands of trees in swathes of deep magenta are made even more vivid by the soft, muted tones of the fields and cloudy sky. “Winter Sunset” is a similar scene from a different angle at a later time of day.  The sky is streaked with salmon-colored clouds as a pale winter sun casts shadows across snowfields and the distant mountains.

Two landscapes bring us back to autumn. “Clothesline Block Island Home” shows towels snapping in a late autumn afternoon wind — the last use of the clothesline in the off-season. “Hen House Autumn” shows an array of chickens happily pecking in a shaft of sunlight, their bobbing red combs little sparks of color like flecks from the deep red door to the weathered hen house behind them.