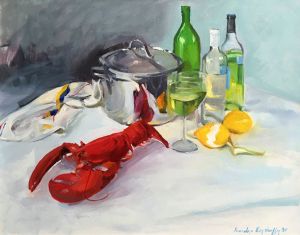 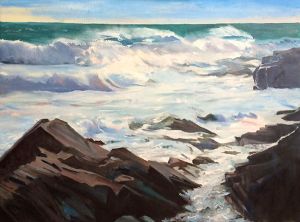 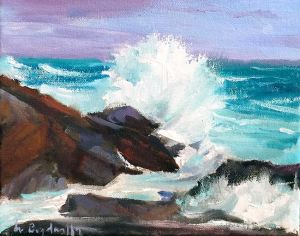 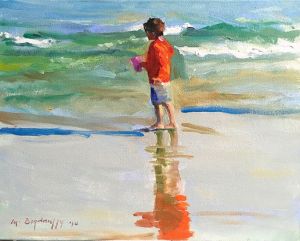 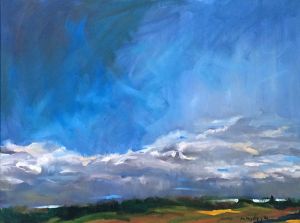 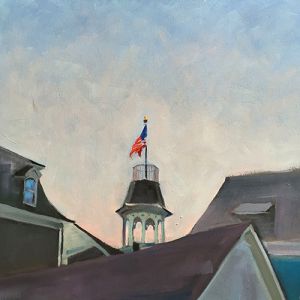 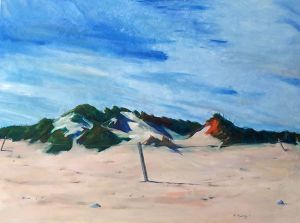 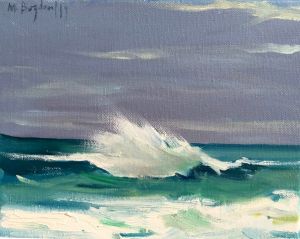 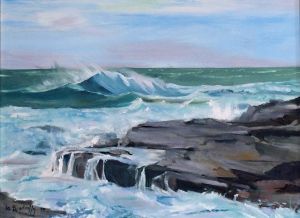 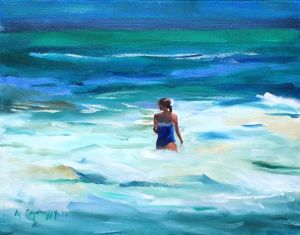 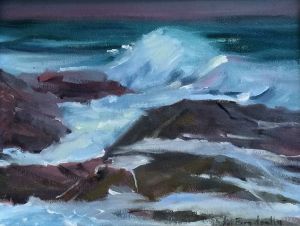 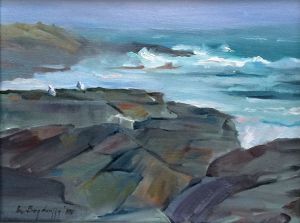 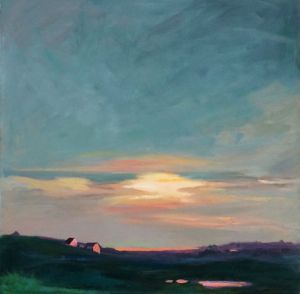 Seascapes, landscapes, and still-lifes in oil and watercolor by Island artist Marilyn Bogdanffy will be on exhibit at the Jessie Edwards Studio on the second floor of the Post Office building from August 21 to September 2.  The opening reception is on Saturday, August 22, from 5-7 pm.

Bogdanffy’s range of subject and technique in oil and watercolor is easily seen in these new works, which include dramatic studies of the sea, views of island sites, and delicate still-lifes. The strong storms of recent years have deeply impressed Bogdanffy with the power of the sea, and half of the works in this show are seascapes that depict that energy in various aspects. “After the Storm,” a large oil, captures the force of the rolling surf still churning after a storm as it crashes against jagged rocks on the shore and roils and foams among the crevices in the foreground.  “Mare’s Mane” depicts the spume of a wave’s crest as it hits off-shore rocks and spills over sharp, flat rocks on the shore.

“Big Splash” and “Little Splash,” smaller companion pieces, show the subtle differences between the force of a wave crashing against an implacable rocky shore and one that splashes against a cluster of rocks further off the shoreline. “Seascape” is a near abstract study of the way in which the ever shifting surf washes over and blurs the sharp lines of  the rocky coast.

“The Sea is So Big and I am So Small” would be an abstract study of the water and sky merging in bands of blues and greens were it not for the figure of young bather wading into the sun-drenched water in the center foreground. She brings the scene into focus and emphasizes the power of the world around her. Similarly, “Boy and Sea,” would have an abstract sense of the sea in blues, greens, and white but for the figure of a little boy in the center foreground wearing an orange shirt and holding a small purple pail. He stands at water’s edge, his reflection shimmering in the tidal pool on the sand and giving definition to the scene.

“Winter Morning” is a striking contrast in subject yet another example of Bogdanffy’s interest in the abstract presentation of real things.  A band of grey and black in the right foreground suggests the contours of fields still in shadow as the early winter light falls across a snowy field in the left foreground. Vertical strokes of black suggest the thin trunks of a stand of trees. The immense cloud-filled sky is colored in soft tones of yellow, pink, lavender, blue, and grey as a pale sun rises.  “Sundown” is a more clearly defined view of the silhouettes of houses and a pond reflecting the rosy pink light of the setting sun, while the surrounding fields are in shadow and the cloudy sky is a mass of soft grey, turquoise, and yellow.

Bold color and shimmering reflections of light suffuse “Still-Life with Lobster.” A bright paprika-red lobster sprawls in the foreground on a pristine white cloth.  Its tail is reflected in the gleaming stainless steel pot. Bright yellow lemons, their peelings providing streaks of color on a dish cloth, are reflected in luminous wine glasses and bottles arrayed behind them.

There are four watercolors in the show. “Across the Pond,” is a view of Elijah’s Tug Hole on the South West Point, with its deep blue water, green fields, and a distant roofline in relief under a big blue sky streaked with clouds. “A Gentle Breeze” is a study of a swaying clothesline heavy with colorful laundry. The dark branches and rosy blossoms of “Crazy Orchid” capture the whimsical nature of the plant with its bending stalks and buds shooting every-which-way. In “Day Lilies,” Bogdanffy was taken by the long stems, “like stilts,” that tenuously support the orange lilies in their various stages from bud to bloom to withered flower.

Bogdanffy’s brush has a long reach, from tranquil still-lifes to turbulent seascapes, and quite a lot in between.