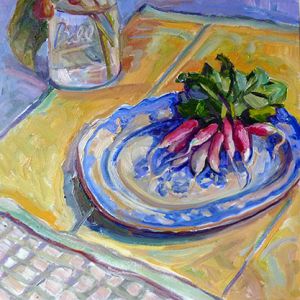 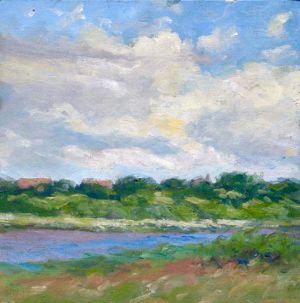 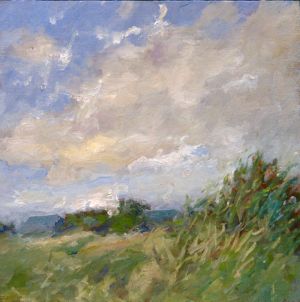 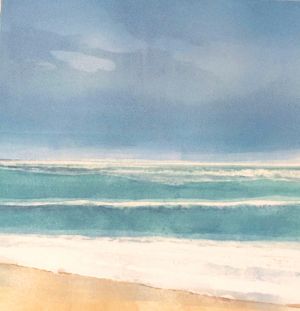 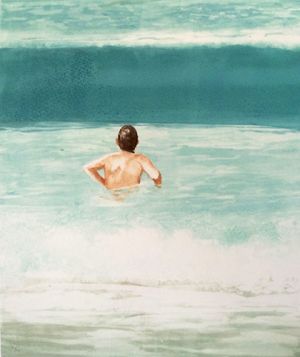 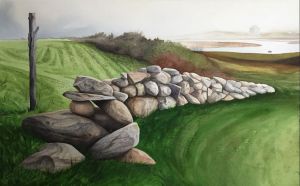 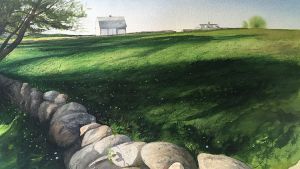 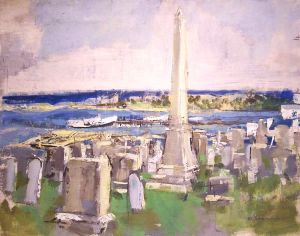 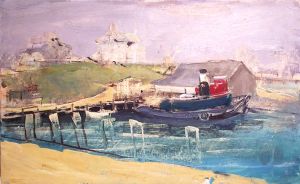 The 20th summer season at the Jessie Edwards Studio opens Memorial Day weekend with a wave of fresh new works by gallery artists, among them Gerard Blouin, Kate Knapp, Heidi Palmer, Fred Poisson, and the late William Sommerfeld (1905 – 1998). Cupcakes by BI Sugar Rush and lemonade will be served May 28th and 29th from 11 to 4 at the gallery on the second floor of the Post Office building.

Befitting this weekend of remembrance, William Sommerfeld’s newly released oils bring us back to the 1950s. In “Island Cemetery,” worn headstones in the foreground are clustered around a center obelisk reaching into the clouds. In the distance, in the Salt Pond harbor, a ferry is tied up at the simple weathered pilings. Sand dunes and a line of deep blue sea meet the horizon and a sky filled with hazy white clouds. “Old Harbor Tug with Fishing Shacks” is a near abstraction of two tall buildings (the Harbor Baptist Church and the Ocean View Hotel?) on a green hillside with the wharf and shack in the foreground. Dark arcs of brushstrokes and a dab of red suggest the tug boat tied to the pilings along the dock.

Kate Knapp’s richly colored oil “Distant View of Town” takes a long range view of Old Harbor’s distinctive old buildings seen from a hillside looking east across the deep blue waters of the inner ponds to the town. If one knows the island and these structures, this fresh perspective is like seeing old friends in a new (and most welcome) light. Knapp’s still life, “French Radishes,” is a bouquet of crisp red radishes tossed onto a blue and white plate set on a yellow mat – a scene fresh and full of texture.

Two of Gerard Blouin’s oil-on-linen panel are cloud inspired. In “Clouds at Mansion Beach,” our eye shifts from the dense brush in the foreground to the shadowed roof lines of a distant farmhouse to a large sky piled with moving clouds and flecked with dashes of white and patches of blue. In “Andy’s Way Clouds,” a smudge of yellow suggests the sun somewhere behind a dense low cloud cover hanging over the beach and foliage along the inlet of water in the foreground.

Fred Poisson’s new watercolors bring us into broad sweeps of field and meadows bounded by stone walls. “Island Wall” is a vibrantly colored view of a stone wall bending diagonally from the left foreground to the center where white light sets off the stones. The deep greens of the fields give way to soft brown and tan tones where sand meets the pale waters of a distant pond. In “Mitchell Farm,” the stone wall in the foreground bends to the left and disappears into the deep green shadows that dapple the field. The familiar white gable-roofed barn stands pristinely in the distance.

Heidi Palmer’s monotypes of the beach combine broad bands of cool shades of blue, turquoise, tan, white, and green that somehow convey the light and warmth of a summer day. In “Seascape,” the sea rolls in gently and froths on the sand. “Wading in 2”introduces a young swimmer wading in the foamy surf towards the deep green curl of an incoming wave. Summer has begun.