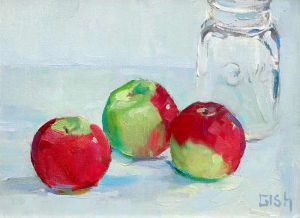 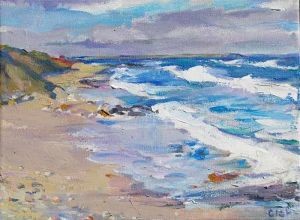 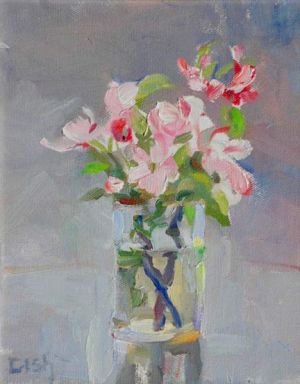 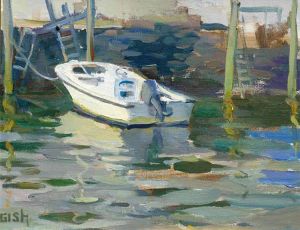 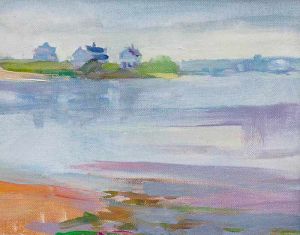 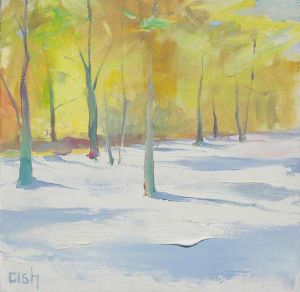 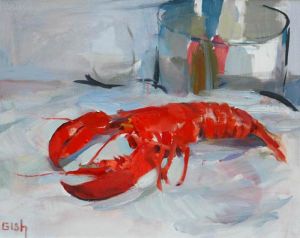 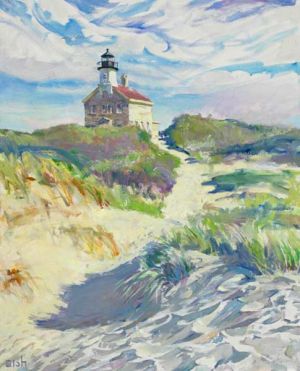 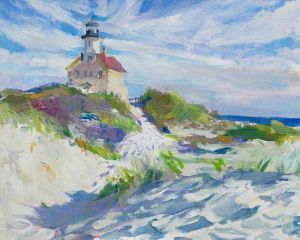 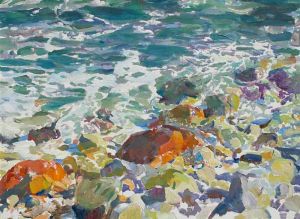 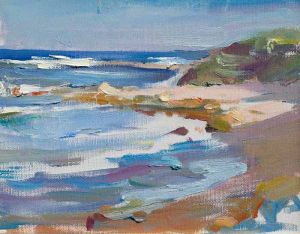 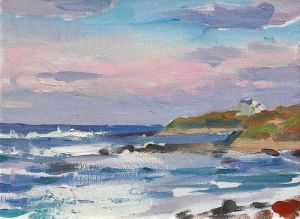 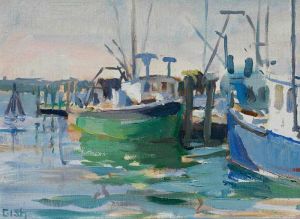 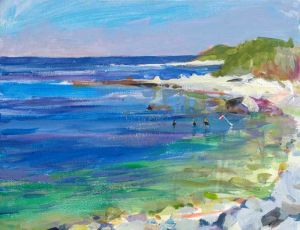 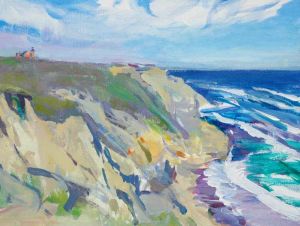 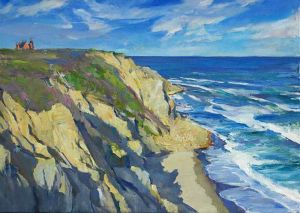 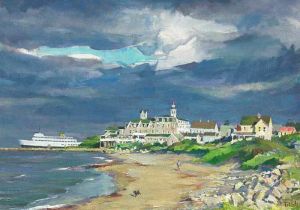 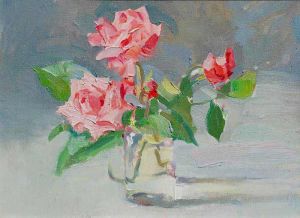 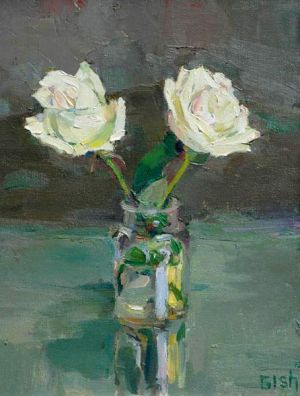 Painted over the past two years, these works reflect Gish’s fascination with light, color, texture, and form. They also show the infinite variety Gish perceives in some of his favorite subjects. The sweep of eastern shoreline from south of Ballard’s Beach to the high point along the coast south of the Spring House appears in many guises. Looking north toward the small red smudge that is the roof of the pavilion, “Ballard’s Surf.” is a study of the surf crashing against the rocky shore. The surf’s turbulent texture is created with palette knife.

Looking south along the same shoreline, “Old Harbor Coast” and “Old Harbor Evening” are near abstract renderings of the same beach at different times and different days. In the former, early east light falls on the surf as it rolls gently onto a curve of sand. Deep blue water merges into a light blue sky. In the evening view, western light reflects off the back wing of a  white building on the hill overlooking the incoming waves and casts soft pink light on long drifts off clouds. Different still, “Scuba Sorti” shows three figures in scuba gear setting off for a spear fishing adventure from the beach below the Spring House on a brilliant morning.  Their red pennant bobs in the shallow water. Most of the canvas is of the ocean with its vivid yet subtle waves in cerulean blue, greens, purples, and turquoise rolling onto a beach of softly contoured rocks in mottled shades of gray and green along the shore in the foreground.

“Ocean Rocks” a near abstract close up of the surf splashing against coastal rocks. It is a extraordinary play of light, a liquid and luminous work in blues, greens, yellows, and soft tones of orange, purple, and gray.  “Late Autumn Snow” is another near abstract scene of the artist’s backyard on the mainland. It captures the anomalous snowstorm in late October 2011 when heavy snow fell on trees still in leaf.

Two 16″ x 20″ works are studies of two larger (29″ x 40″ and 41″ x 33″), yet they are also completely finished pieces. “Study South East Bluffs softens the bluffs and the surf below while the larger work does just the opposite: “South East Bluffs and Ocean” shows the texture of  the fissures, clefts, and crags of the bluffs and the livelier waves on the shore below.  “North Light Dune Study” and the larger “North Light and Dune” are more alike in their use of western light creating dappled patterns in the hollows of the dune path leading to the lighthouse, its red roof and lantern in relief against a cloud swept sky. Still, the perspectives are a bit different, one at a steeper angle than the other.

“Storm Over Surf Row” depicts that stunning moment when light breaks through a dark mass of storm clouds and transforms the landscape – in this scene, the ferry leaving Old Harbor, the facade and gables of the Surf Hotel and part of the National, adjacent structures, and, on the beach, a walker and his dog.

Several small still-lifes are full of light and color. In  “Apples and Mason Jar” the glossy red and green apples gleam against a white background that is reflected through a translucent glass jar.  In another, the bright red carapace of a freshly steamed lobster glistens against a white background. Dabs and swirls of color in “Red Roses,” Blossom in Water Glass,” and Roses in Water Jar” form the delicate flower petals while the stems waver in the limpid waters of the glass jars.

Other works are of a familiar white Victorian cottage drenched in morning light, a near abstract view of the Great Salt Pond in subdued tones, trawlers tied to pilings with their reflections rippling in the water, and a panorama of a pristine day at Scotch Beach seen from the path through the dunes.