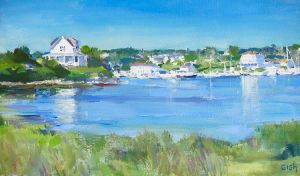 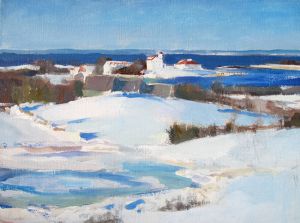 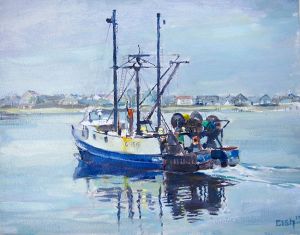 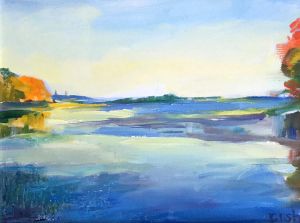 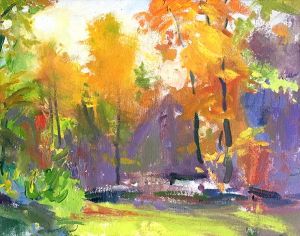 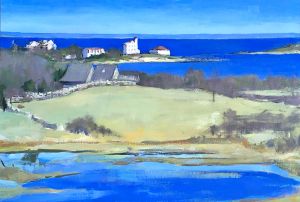 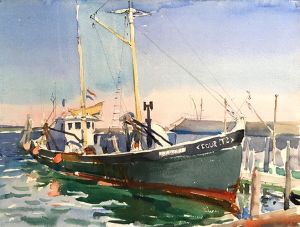 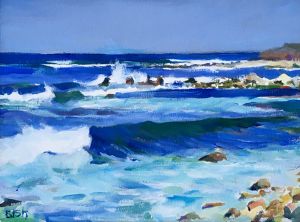 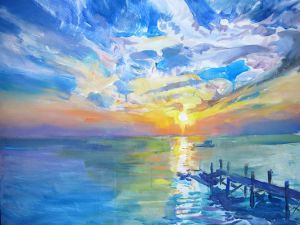 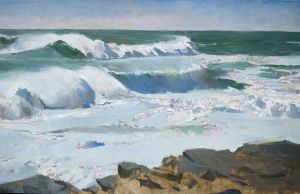 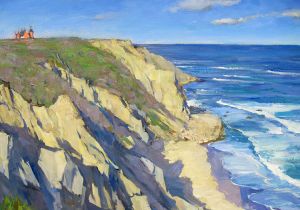 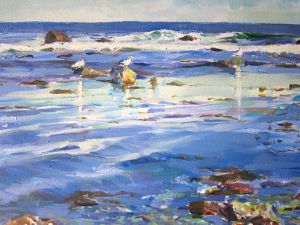 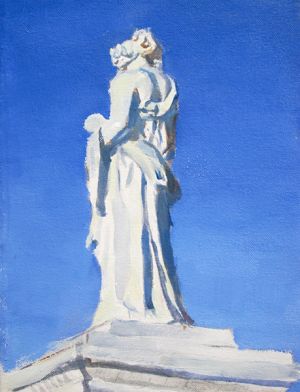 “Still alive, still painting,” declared nonagenarian Peter Gish in a recent conversation. As proof of his statement, his new work in oil-on-canvas will be on exhibit for three weeks at the Jessie Edwards Studio from August 18 to September 8. The opening reception is Saturday, August 19, from 5-7 pm at the gallery on the second floor of the Post Office building.

Neither Gish’s love of working from nature, especially on Block Island, nor his vision has diminished. “I see better now than when I was younger, “ he said.  What he sees he passes on to us with intense colors and many subtle layers of brushstrokes. “Mansion Beach Tidal Swells” (24”x36”)  is a good example. Gentle waves in various tones of blue ripple among seaweed and rocks in the foreground.  Three white gulls, each on a different rock, perch in the sunlight that falls across the tidal pool and the surf crashing against distant rocks. Beyond, there is a large expanse of calm sea and sky. The smaller image (16”x22”) of this same view, “Study for Mansion Beach”  a finished piece in itself, shows how various a scene can be. Less placid than the larger work, this one has more texture to the waves and the gulls’ feathers, the rocks are closer to the foreground, and a different light falls on deeper blues and purples in the water and sky.

In contrast, “Atlantic Rollers (34”x56”) captures the power of the sea with its foaming white waves rolling in from a bottle-green sea to crash and pool against the jagged rocks in the foreground. “Before Deepwater” is another large work (30”x 40”) but here the emphasis is on a different force of nature:  erosion seen in the varied texture of the Bluffs, shadows and light falling across the deep fissures and the purple and green foliage atop the cliffs. The southwest light defines the tower, the roof lines, and the orange brick of the SouthEast Light.

Painted in the winter, “View from Coast Guard Road” (21”x31”) is a scene evoking the spareness and solitude of winter.  We look across the icy pond and snow fields of Champlin’s Farm. Grey and brown hedgerows zig zag across the white fields seeming to merge with the roof lines of the barn and sheds. The white Coastguard buildings rise from the snow, their red roofs bright against a wintry blue sea and sky in the background. Other subjects that catch Gish’s eye are include “Rugosa Rose,” a small (11”x14”) study of a clump of beach roses, its shadow cast across the light sand. “Trawler Charlie” (16”x20”) is a view of the stern of the fishing boat with all its nets and gear rolled up as it heads into its Point Judith port. Gish is also fond of the statue of Rebecca in town — and here she is —“Rebecca on Blue,” (9”x12”) seen from the base of the statue, standing tall in her white gown against sapphire blue sky.

In addition to these new works, there will be a photographic display of Gish’s military images from his service as a Marine pilot and combat artist in Vietnam and from his later time in 1991 in Iraq with Operation Provide Comfort, and again, in 1993 in Somalia for Operation Provide Hope. The originals are in the National Museum of the Marine Corps in Quantico, Virginia.