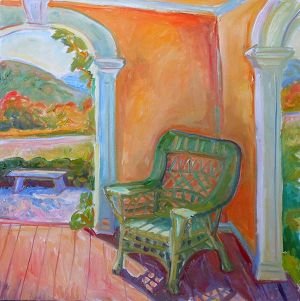 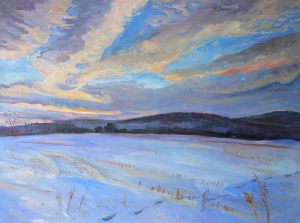 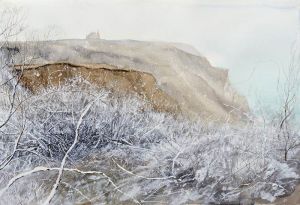 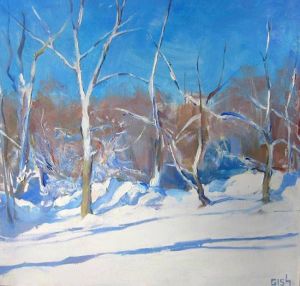 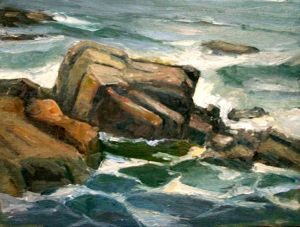 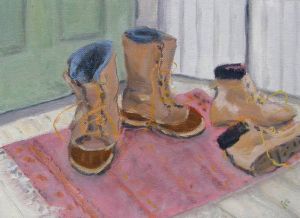 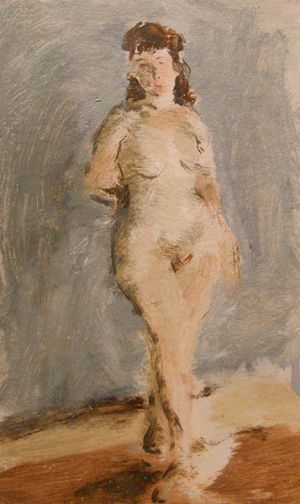 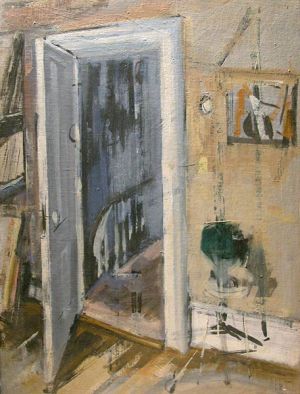 As the days shorten and the angle and intensity of light changes, artists follow those changes that draw them to interior worlds of home and studio or lure them out into sharper, crisper “plein air” locations.

Kate Knapp captures the transition from summer to fall in “Chesterwood Chair,” a new oil-on-canvas that she painted on a  late September visit to Chesterwood, the  Stockbridge, Massachusetts home of sculptor Daniel Chester French (the Lincoln Memorial, the Minuteman). She said that she “wanted to capture the last warm sunlight of summer.”   And she does:  a deep green wicker armchair sits in the corner of a sunlit back porch aglow in warm tones of orange light cast on the walls and wooden floor. Beyond, seen through the white arches, leaves are turning yellow and orange against the deep green foliage of the Berkshire Mountains. In contrast, Knapp’s oil-on-canvas “January Sunset in the Berkshires” depicts the waning rays of a pale yellow sun filtering through clouds lying low over a field covered in the cold beauty of blue-white snow, studded here and there with brittle stalks of stubble.

Peter Gish’s oil-on-canvas “Winter Trees” induces no shivers. Instead, the bare, snow-lined tree trunks and branches are crisp in a clear bright winter light.  The limbs reach into a cloudless blue sky, and their soft blue-grey shadows fall across the edge of a pristine field of snow.

Fred Poisson’s watercolor. “Flurries,” brings us into a swirl of snow falling on the tangled vines and brush on Mohegan Bluffs, lining the deep clay furrows, and blurring the Southeast Lighthouse against the opaque grey of a snow-filled sky. A streak of turquoise in the lower right corner suggests the sea below.

“Winter Seas,” an oil-on-panel by Gerard Blouin, brings us close to that sea in an image of jagged wet boulders  with the cold, slate grey-green surf  eddying around them.

Jessie Edwards’ oil-on-panel, “Drying Boots,” brings us in from the cold.  Two pairs of familiar Bean boots stand askew on a red rag rug just inside the green door and against a background of white wainscoting.

Two interior scenes in oil-on-board by the late William Sommerfeld that have not been shown before are painted in pale yet warm tones. One is a placid nude, her soft, ample contours set against a grey background and enlivened by her auburn hair.  A similar light falls across Sommerfeld’s “Doorway,” giving the scene an almost impressionistic ambiguity.   We are in an upper room in an old house, perhaps an attic space, looking through a doorway at a dimly lit landing with a white banister suggesting a staircase. The white door stands ajar to the left of center, and on the wall to the right of the doorway is what could be a small portrait of a man or maybe a mirror reflecting a person in the room looking through the doorway. An almost imperceptible figure stands in the dooway and gazes directly at the viewer with pale grey eyes — a cat – black ears, grey body, and black legs ending in white paws.

Two new prints of Sandra Swan’s woodcuts, “Heifer” and “The Old Manisees Hotel” will be available for the holidays. “Heifer” is a giclee print of a profile view done in rich russet and white, with the animal’s head turned to the viewer.  “The Old Manisees” is a 16 x 40 silkscreen of the old Victorian Hotel on Spring Street.