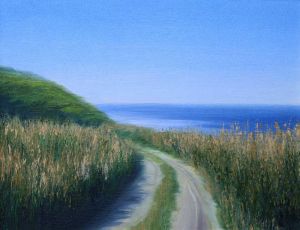 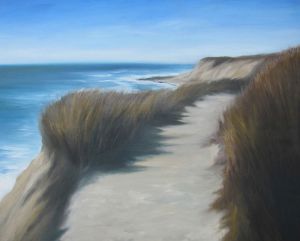 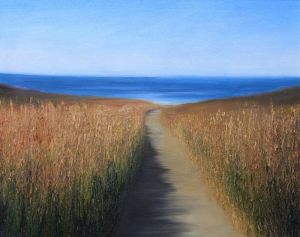 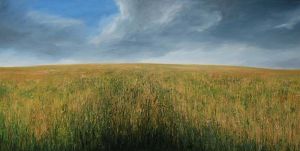 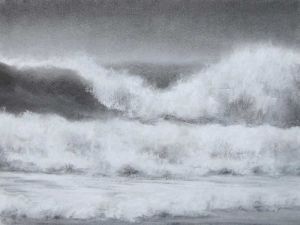 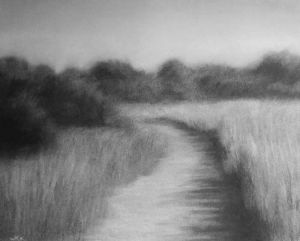 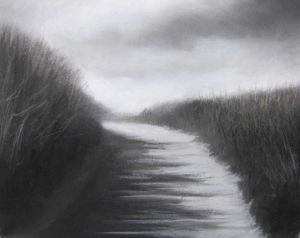 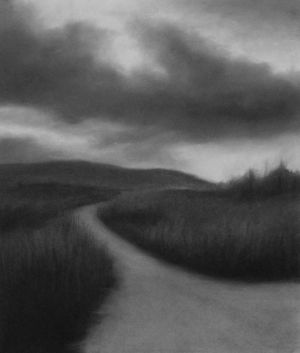 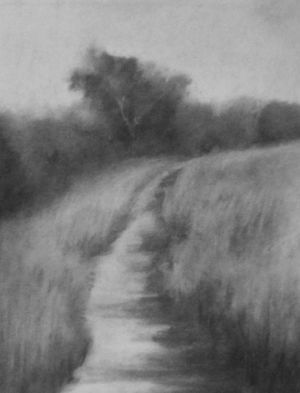 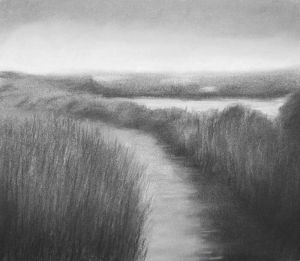 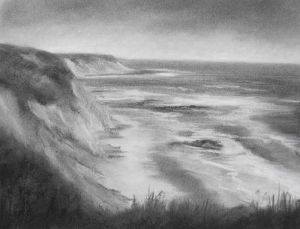 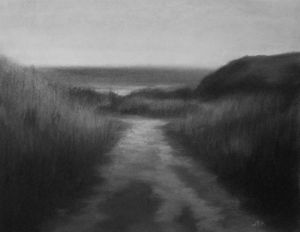 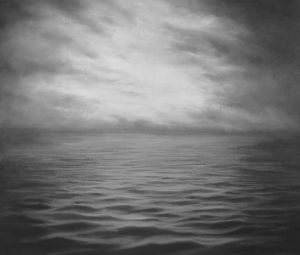 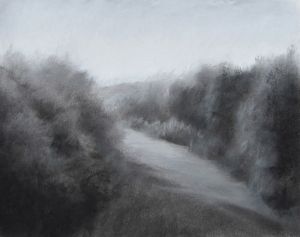 21 new works in oil on canvas and in charcoal and pastel on paper.  Whitney Knapp’s pieces are meditations and celebrations of the natural world in its various and complex aspects from the tranquility of a field washed in sunlight to a dark, precipitous path to the sea, and to the turbulence of a roiling surf and crashing waves.

A recurring motif in these works is of a path through fields and along the shore or the bluffs above the sea. Knapp evokes the endless variety of this motif through her use of color, shading, and perspective in the oils on canvas.  While these works are grounded in the real world of time and place, they also convey a transcendent state of being. For example, in “Acceptance,” a large work, a rosy-golden light spills across a hayfield and casts deep shadows across a path that cuts straight through the center of the field and leads upward to a pristine light blue sky.  Similarly, the smaller work, “Accordance,” has a center path that curves along the soft contours of verdant fields with a deep blue sea and light blue sky beyond.

In contrast, the somber tones of “Diversion” depict a path along the edge of the bluffs with steep slopes and dark brush against a teal sea and a light azure sky.  In “Elevation,” the path has ended and the view is of tall grass on a bluff in the left foreground over an arc of white sand below with an expansive, gentle sea and clear sky dominating the rest of the canvas.  The enigmatic “Latitude” also has no path, just a field of amber waves of grain meeting a sky of dark, lowering clouds. A glimpse of clear blue suggests either that a storm is gathering, or, more likely, has broken up and is passing on.

In her charcoal and pastels, Knapp melds shades of black, dark and light greys, and white to heighten details, intensify mood, and add depth and dimension to the scenes. The interplay of dark and light dominates “Cacophony,” in which the turbulence of the waves and swirling, foamy surf has a tactile quality that conveys the power and energy of the sea against a darkened sky.

“Confirmation,” in contrast, is a scene of rolling waves in a calm sea with light suffusing the top half with sea and sky merging in a soft blur below.

Texture and detail are strong elements in these works, ‘Culmination” is a dramatic view of the bluffs dominating the left center with gritty fissures in the steep clay slopes that drop to the beach below. “Descent” also emphasizes the jagged edges of the bluffs and a dark, rocky path to a beach where waves relentlessly roll ashore.  “Remembrance” and “Memorial” are full of subtle shading that conveys a serene and pastoral mood, while ”Deviation” is more ambiguous with its dark fields and silhouettes of buildings in the background under a low bank of dark clouds tinged with light.  The harmony and unity of land, sea, and sky is conveyed in “Validation,” with its mingling of dark and light softening the contours of the bluffs on the left, spiky grass in the foreground, and an expanse of calm surf at low tide against a light horizon and the sky.