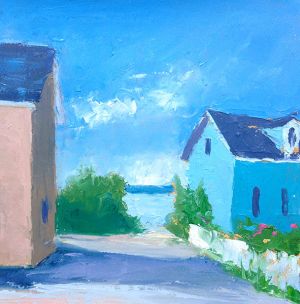 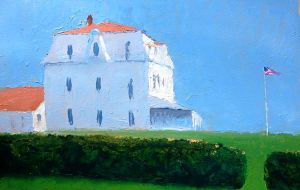 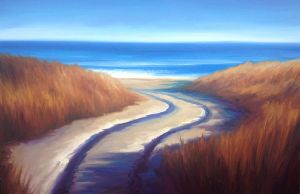 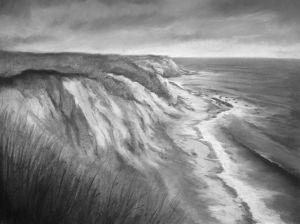 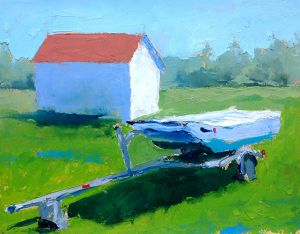 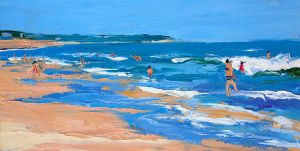 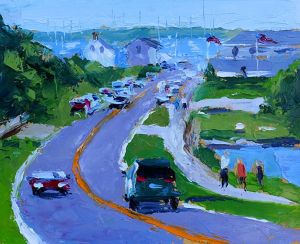 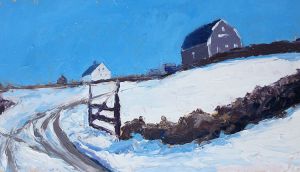 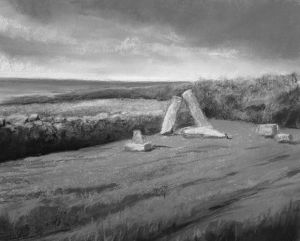 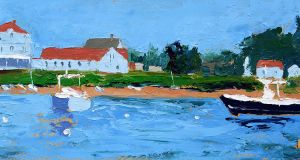 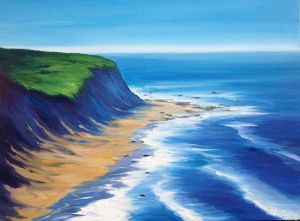 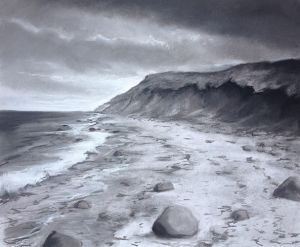 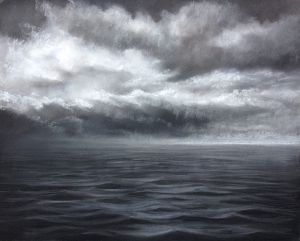 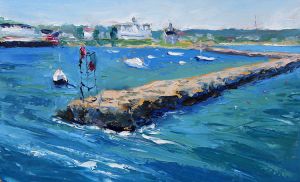 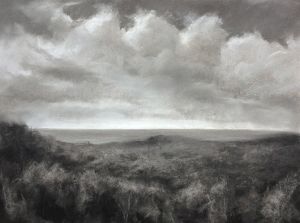 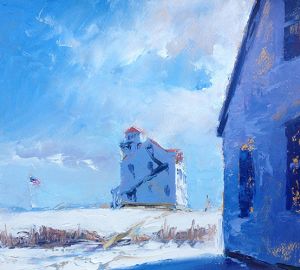 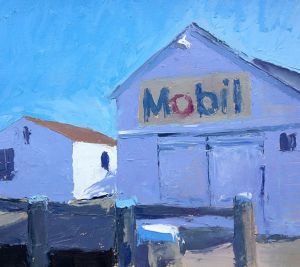 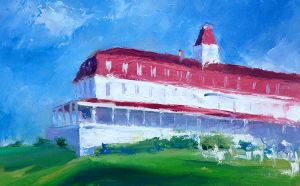 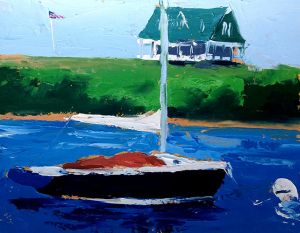 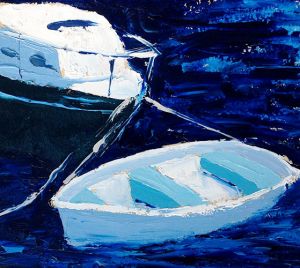 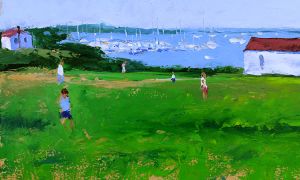 Whiney Knapp’s explorations in surface texture are on vivid display from July 17 to 30 in the Jessie Edwards Studio on the second floor of the Post Office building. The opening reception is on Saturday, July 19, from 5-7 pm.

Of the over 20 works in the show, there are more oils than charcoal drawings, and of these only two are painted on canvas with a brush. The rest are painted with a palette knife on heavy-bodied absorbent watercolor paper. These represent Knapp’s growing and changing aesthetic towards what she calls a “gritty quality” in surface textures and transitions among the various elements in a piece.

By painting with a knife, Knapp is able to build up the surface texture and achieve purer, more vivid color.  Equally important, these pieces are done “alla prima,” (at once, in one sitting) while the paint is still wet, which gives freshness and fluidity to the transitions. For example, “Rooftops” is a vivid view of Old Harbor rooflines seen from a hillside above town with the blue peak of a roof in the foreground resting against deep, varied green foliage, some of which bleeds into the roof edge. Beyond the arc of greenery, the roofs of Water Street buildings — the Seaside Market, the National Hotel, the Surf, among others – dominate the center with blue water and the sand and dune grass of Crescent Beach melding into deeper blue water and, finally a lighter blue sky. Each element has definition and clarity yet merges with the others.

Texture is very important in “Shoals,” which captures the weathered sheds and pilings on Payne’s Dock in tactile detail. One can see and feel the peeling paint on the Mobil sign, and the edges of the roof shingles are worn down and bleed into the pale clouds in the blue sky.  The almost paradoxical combination of hard edges and fluid lines runs throughout these pieces, especially in “Spring House Adirondacks,”  “Innis Fail Bathers,” “Proximity,” “July,” a view of the Sullivan House, and “Symbiosis.

Look at the two large oils-on-canvas to see the difference a change in technique and medium can make. “Exploration,” a curving track on a beach path, and “Pots and Kettles,” seen from a Clayhead bluff, are the two oils painted on canvas with a brush. The colors are vivid and full of variety in shading but smoother in texture and softer in their transitions.

Again, though in a different medium, the charcoal and pastel works in the show also have the smooth surface texture and soft transitions seen in the large oils-on-canvas. “Sanctuary” is a view of the dense brush of Rodman’s Hollow blending with a calm sea under a sky of billowing clouds. “Fortitude” depicts the stalwart bluffs, their sandy fissures illuminated under a dark, lowering sky. Darker still is “Relativity,” in which the gentle swells of the sea merge with masses of dark clouds with light emanating from above.