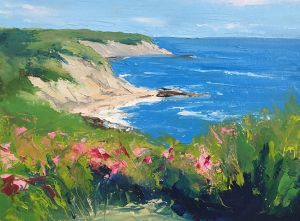 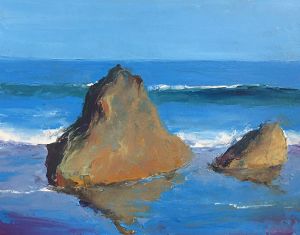 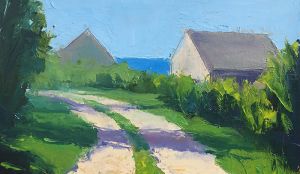 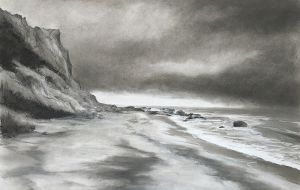 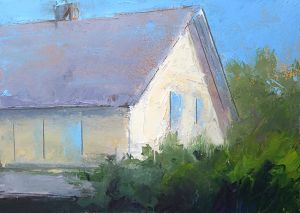 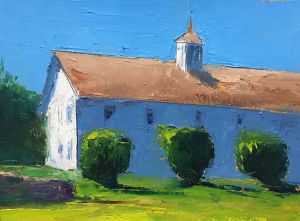 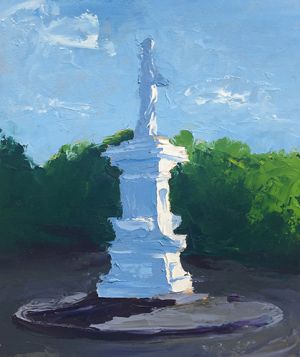 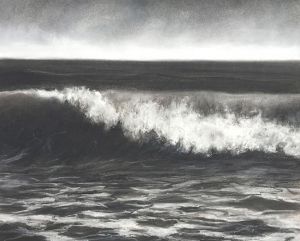 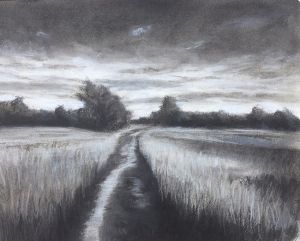 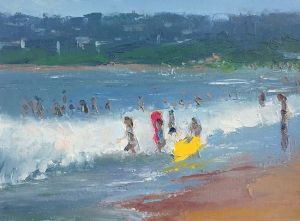 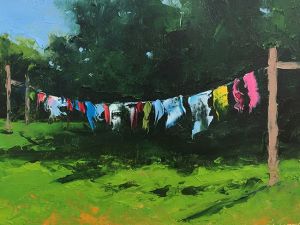 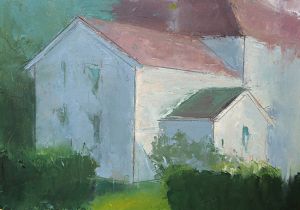 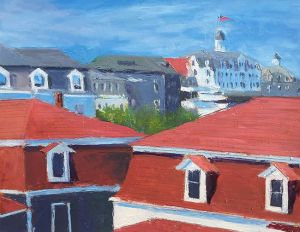 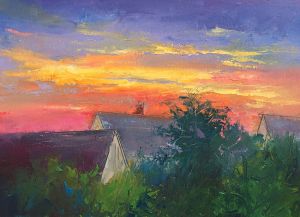 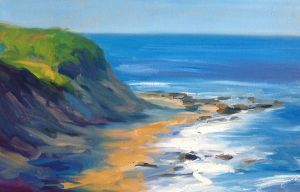 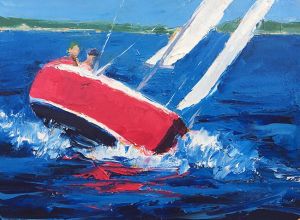 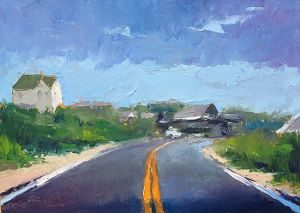 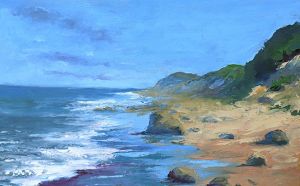 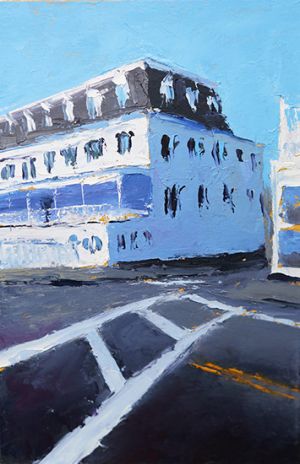 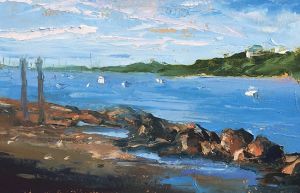 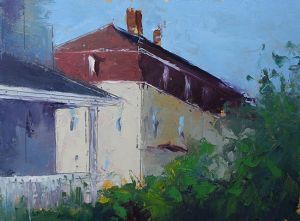 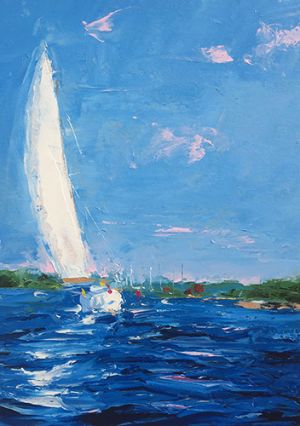 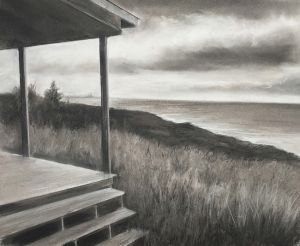 Whitney Knapp’s continuing experimentation in surface texture and color can be seen in many of her 25 new works on exhibit from July 10 to 22 in the Jessie Edwards Studio on the second floor of the Post Office building. The opening reception is on Saturday, July 11, from 5-7 pm.

All but one of the 21 oils are painted with a palette knife on heavy-bodied absorbent watercolor paper. “Painting with a knife gives me freedom of expression,” Knapp said recently about her experimentation with color, texture, and the transitions among the varied elements of a piece. “Close Reach” is one example of this freedom. A vivid red sailboat in the foreground, its bright white sails taut against the wind, surges across deep blue water at a perilous angle. The scene is full of action, speed, and the thrilling tension of the moment. “Suspension” is another example of a work full of color and motion. Light falls on a clothesline arrayed with brightly colored garments that seem to dip and sway in a light breeze.

Comparing “Clayhead,” the only oil painted with a brush, and “June Cliffs,” done with a palette knife, is a good way to see the difference a change in technique can make. “Clayhead” is full of subtle shading, smooth in its texture, and soft in its transitions. “June Cliffs,” also full of light and shade, has a more tactile quality, especially in the texture of the sandy bluffs, spiky shrubbery, and bright pinks and reds of the blossoms in the foreground.

Knapp is especially interested in ways to define and redefine edges. This can be seen in many of her studies of old, familiar Block Island structures. In “Dunn’s Cartway Rooftops”, the roof lines run into each other at various clearly defined angles yet they also seem to bleed into the blue water and sky in the background. In the foreground, many shades of green blend to suggest shrubs and lawn growing into the buildings, softening or obscuring their edges.

“Harborside Crosswalk” and “Hygea House” take this method to a near abstract level. Both works present their familiar structure at an unusual angle with rooflines, siding, and windows seeming to be melt into each other. The muted colors of “The Historical Society” suggest the passage of time and Knapp has both blurred the edges of the roof lines and siding in some places, and in others, she has given the edges definition with fine pencil lines drawn over the paint. “Twilight” is similar in the use of pencil to define rooflines that rise from deep green foliage into a sky at sunset that is vivid with streaks of vermilion, orange, yellow, and deep purple and blue.

The four charcoal and pastel works in the show have the same sense of smooth texture and soft transitions that is felt in the one oil painted with a brush. Knapp has said that she uses the medium of charcoal to suggest the power of the natural world. The benign aspects of nature can be seen in “Rodmans,” in which a light brightens the underside of low-lying clouds and falls across a path cutting through the tall grass in the center of the scene and that leads to taller brush and trees in the distance.

In “Rising Tide,” a sense of the evanescent nature of the sea is conveyed through a line of white surf rolling across dark water in the background into rippling waves dappled by light in the foreground. “Mohegan Squall” captures the fitful aspects of a storm system passing over the beach and the bluffs. Low, dark storm clouds seem to snuff out the light on the water’s edge and cast deep shadows across the bluffs. “Abandoned Overlook” evokes the solitude of an empty building set in shadow in the left foreground and facing out across tall grass to an expanse of calm sea and sun-lit banks of clouds.