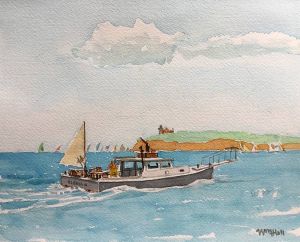 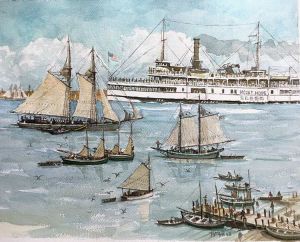 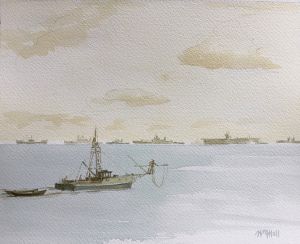 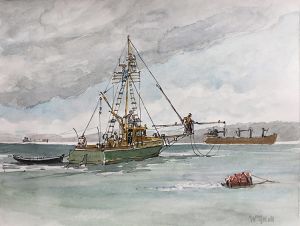 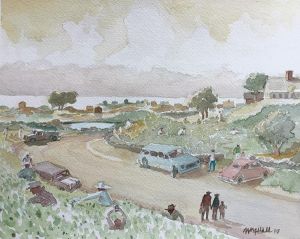 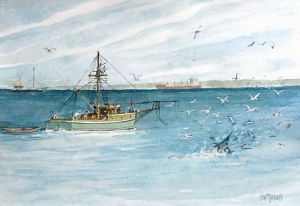 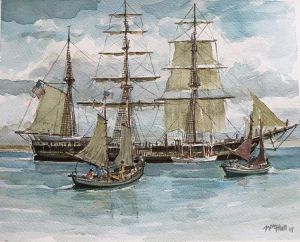 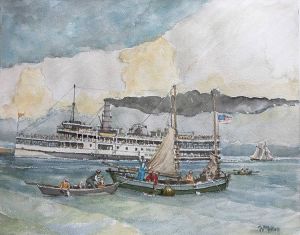 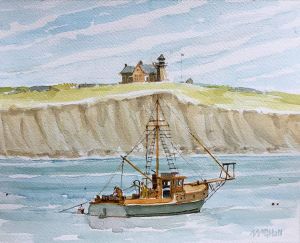 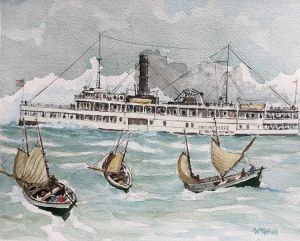 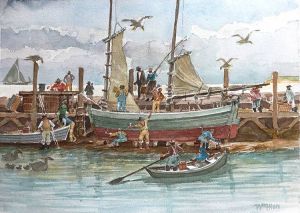 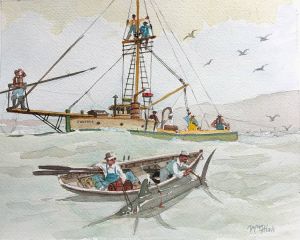 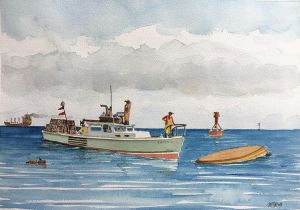 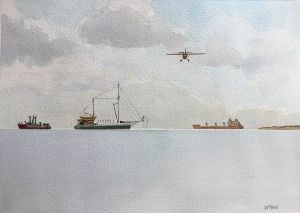 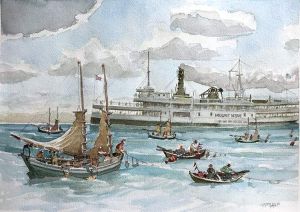 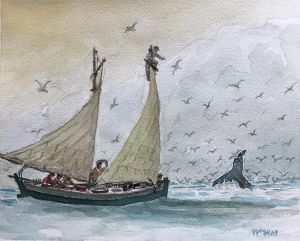 William T. Hall’s new exhibit of watercolors, “Block Island Nautical Life and Historical Views,” depicting earlier times of boating and fishing on Block Island, will be on exhibit from July 21 to August 2. The opening reception is on Saturday, July 22, from 5-7 pm at the Jessie Edwards Studio on the second floor of the Post Office building.

Hall’s use of classical watercolor techniques, his knowledge of boats and Island history, and his talent for story telling combine to make this exhibit both a meticulous rendering of old working boats and a narrative of the quotidian concerns of Island mariners and their relationship to the sea. We see the images, and we can read Hall’s brief accompanying stories that draw us into an earlier time on Block Island.

Hall laments the passing of the old boats in ‘Cowhorns Pay Their Respect,” in which he imagines a possible and poignant encounter between the stately three-masted whaler “The Charles Morgan,” launched in 1841, and two Double Enders, a boat designed and used on Block Island in the 18th and 19th centuries that fell out of use by 1900. “Atlantic Fleet of Block Island 1935,” is inspired by a memory of a dramatic moment told by the artist’s father, who grew on Old harbor Point. Early one morning when he was 10 years old, he awoke to see the entire Atlantic Fleet holding maneuvers two miles off shore. In the pale early morning light, a swordfishing boat in the foreground emphasizes the profound difference in scale and purpose between the working boat and the imposing battleships arrayed across the horizon. A dramatic moment of a different sort is seen in “The Found Dory,” which shows a trim lobster boat happening upon a drifting overturned dory, suggesting the sad story of a crew lost in an accident in the busy shipping lanes beyond the fisheries.

Working boats and the lives of fisherman are an enduring subject for Hall, who was a lobsterman for awhile and who went swordfishing with his father. “Why Children Become Sailors” captures the excitement seeing a pod of whales while out swordfishing, with gulls swirling above the whales as they dart in and out of the water. “Block Island Swordfishing Boat” dramatizes a particular moment in the old method of swordfishing after the fish has been harpooned earlier by the striker. “Tending a Swordfish” emphasizes the relative calm after the swordfish has been successfully harpooned. The men in the dory tend to the fish in the foreground while the fishing boat bobs in the swells and gulls trail in its wake. In contrast, the risks of swordfishing are seen in “Breaching Swordfish” as a swordfish slashes wildly through a school of fish.

The cohesive fishing community is seen in several of Hall’s works. “They Fished as a Fleet” shows in wonderful detail the varieties of Double Enders (also known as Cowhorns) as the fleet heads east to the fishing grounds. Beyond them, on the horizon, the impressive steamship “The Mount Hope” passes by under heaps of clouds drifting through the pale blue sky. “All Together Steam and Sail,” based on Providence, R.I. Harbor archives, is another view of the many boats — catboats, whaler, schooners, double enders, steamships — that plied the Rhode Island waters in the 1800s. The community’s cooperative spirit is also seen in “Old Harbor Tide,” a detailed scene of double enders being cleaned and repaired at the docks in a rudimentary Old Harbor breakwater.

“Leona A/Lobstering Block Island” shows pots being set out in trawls off the Southeast Light and is a salute to the venerable Block Island lobster boat that worked the Block Island waters for 100 years. “Lobstering During Race Week” is a view of “The Gloria H,” named after Hall’s mother, that shows the natural and complementary connection between sailing and the fishing trade.