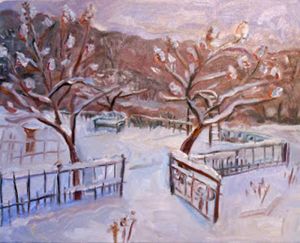 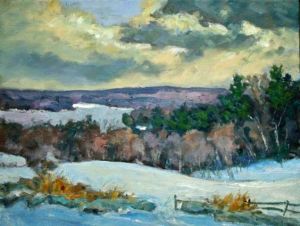 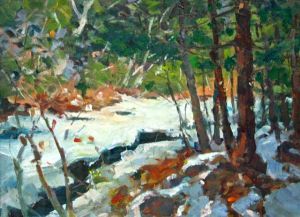 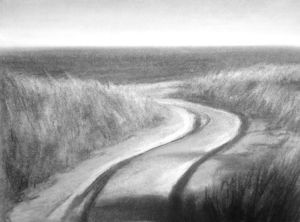 In this long winter season, the artistic wintry mix in the Jessie Edwards Studio includes works in watercolor by Fred Poisson; oil by Peter Gish, Kate Knapp, and Gerard Blouin; and charcoal and pastel by Whitney Knapp.

Painted in early December 2013, Kate Knapp’s oil-on-canvas “The Winter Garden” captures the change of seasons as an early snow transforms the spare structures  and features of  a garden lying fallow. Light snow defines the lines of a rustic arbor, gate, and fence enclosing the garden.  The sundial wears a rakish white cap , and the graceful limbs of a pair of  trees flanking the gate are in flower with puffs of magnolia-like blooms of snow.  Under a grey overcast sky, the low sun casts the background in muted brown tones.

“Distant Pond,” Gerard Blouin’s oil-on-linen canvas, is cast in similar muted wintry greys, purples, pale pink, and deep green. A mass of dark storm clouds sweeps across the upper part of the scene while the rolling snow fields in the foreground are divided by the snow-covered branches of a stand of tree (birches?) on the left and on the  right, a  swath of large evergreens. In the distance, the pond’s smooth expanse of grey water reflects the lowering sky.

In a bright contrast, “Riverbank,” Blouin’s oil-on-panel, captures the cold, clean crispness of a winter day with the sun lighting a deep blue narrow ribbon of water, its snowy banked lined with clusters of birches and fir trees in various shades of green. In the left foreground, light dapples the delicate branches of a sapling and its few remaining brittle leaves.

In her charcoal and pastel on paper, “Beach by Sachem,” done in February, Whitney Knapp captures a deep sense of winter stillness through subtle shifts of light and shadow. Dark tire tracks carve through a winding snow-covered beach path with its long grasses bending in the wind to a thin strip of beach and a diagonal expanse of still dark water and grey sky – a contrast to the winding contours of the path.

Fred Poisson renders the delicate seasonal shift towards spring when warmer air meets colder water and creates the misty scene that is the subject of his watercolor “Spring Fog.”  The grey-white of the weathered picket fence across the foreground is repeated in the fog that shrouds the pond and sky beyond the dark grey shingles of a gabled shed set in a yard of pale green grass.

Peter Gish brings us inside with a work in progress oil-on-canvas still-life that is both timeless and as immediate as the present moment in its use of light and texture: light suffuses an empty wine bottle, gives crackle to the skins of the plump, unpeeled onions, and burnishes the gleaming stainless stock pot and its myriad reflections. The blue stripe on the tousled dishtowel extends the blue of a glass plant mister and its reflection in the pot.  Have a stockpot, a plant mister, an empty wine bottle, two onions, and a dishtowel ever had such life and motion? This new work will be part of a larger show of Peter Gish’s work in August 2014 in the gallery.