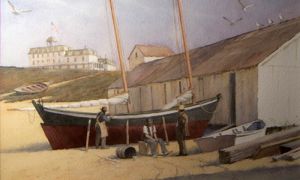 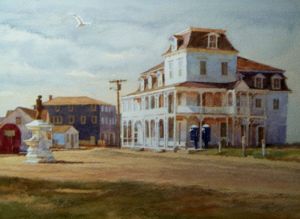 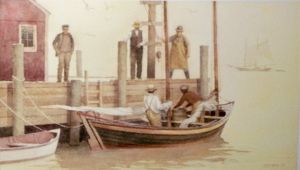 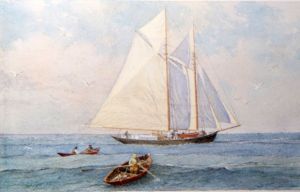 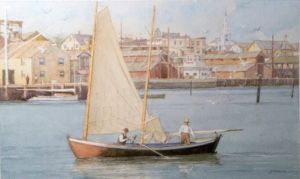 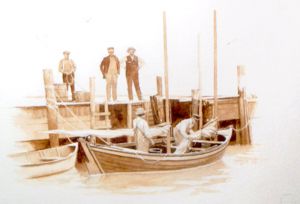 Born in 1927 and raised in Bronxville, NY, Victor Mays vividly recalls square-rigged, rust-streaked grain ships sailing up Long Island Sound. His interest in both the sea and drawing began at an early age. He enlisted in the Navy in the latter months of World War II and was commissioned upon graduation from Yale following the war. While at Yale he took several art electives, and after college wrote and illustrated Fast Iron, a sea novel for young people, which won the Boys Club of America Gold Medal. Continuing a career as writer and free-lance illustrator of magazines and books, with a parallel career as a Naval Intelligence officer on both active and reserve service, he settled in coastal Connecticut with his wife and three children who were introduced to the sea in their family sailing dory. Victor’s drawings are in more than 150 published books, and in magazines too numerous to count.

In 1978 he retired from naval reserve as a Captain and at the same time discontinued book illustration, devoting full time to historically oriented marine watercolors concentrating on American and British sailing vessels and small craft of the last century. His watercolors are delicately rendered with exquisite detail, utilizing hundreds of sketches he made over the years and the collection of vintage photographs and reference material he carefully gathered. His work has found collectors from around the globe.

Victor Mays’s marine paintings have twice received Best in Show Awards and six Awards of Excellence at Mystic Maritime Gallery international exhibitions. His work is in the collections of the Peabody Museum of Salem, the Mystic Seaport Museum, and the Submarine Force Museum. He is a past Fellow of the American Society of Marine Artists.