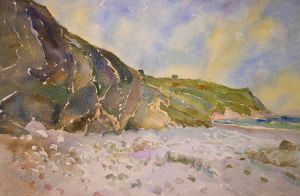 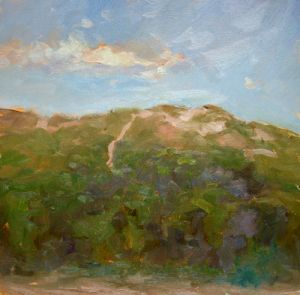 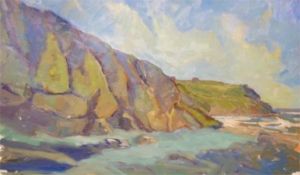 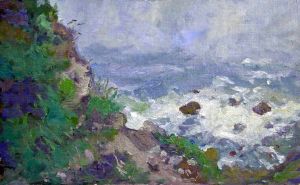 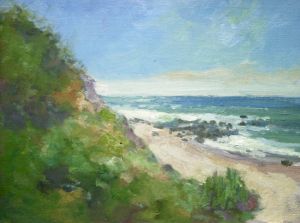 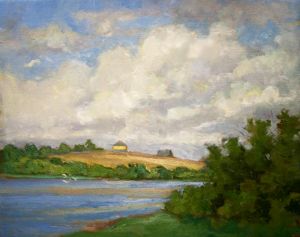 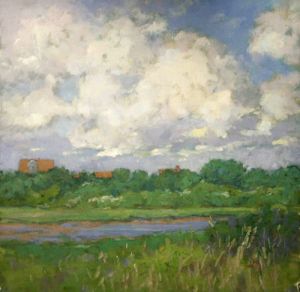 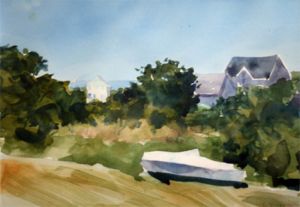 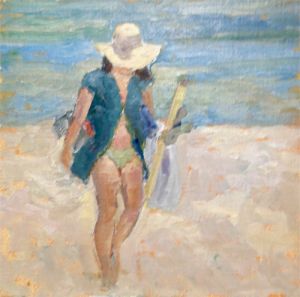 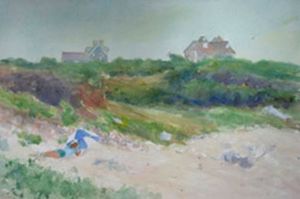 On Island Time, Gerard Blouin’s recent watercolors and oils, will be on exhibit at the Jessie Edwards Studio on the second floor of the Post Office building from August  19 to August 31. The opening reception is on Saturday, August 20, from 5-7 pm.

In these works, Blouin continues to develop his sense  of what he calls “the elusive fourth dimension of time: the fusion of light, color, and motion with the physical reality of land forms, architecture, and the sea.”

Blouin captures fleeting moments in a landscape and gives those scenes a sense of both immediacy and timelessness. For example, in two works in oil-on-panel, “Clouds Across Cove” and “Clouds Over Marsh,” piles of cumulous clouds are in motion filling the sky while the buildings, ponds, and marshes below them anchor the moment and give us a sense of place.

Texture and form are important elements in Blouin’s work and they impart a sense of timeless realism to subjects that are always changing. “Below is the Sea” and “Near the Path” are different views of the Bluffs, but both are full of texture in the deep greens and purples of the grasses and foliage that cover the sandy bluffs. In the former, we look directly down at the sea as it foams around rocks on the shore. In “Near the Path,” we are on the beach as if walking toward a cluster of rocks and part of the larger scene of the blue-green sea, cerulean sky, and cloud-streaked horizon.  In “Summer Light,” we are again on the beach, a soft grey late afternoon light falling across the rocks of Pots and Kettles. In the distance, dabs of red, green, and brown suggest beach walkers as they blend into the scene.

The watercolor “Summer Read” is another scene of a timeless moment: on a quiet beach in a cove, with a few houses rising beyond the dunes, a woman is lying on her stomach reading under a blue and white umbrella. “Girl Hat,” an oil, depicts a woman leaving the beach on what must have been a perfect day. Behind her is the clear, calm, blue water as she walks across the sand, her big floppy beach hat pulled low, carrying beach towel and book. “It just said summer, any summer, every summer,”  Blouin said recently.